Home Art and Culture Macky Brillantes of Motherbasss: From Beats, Jams to Jordans 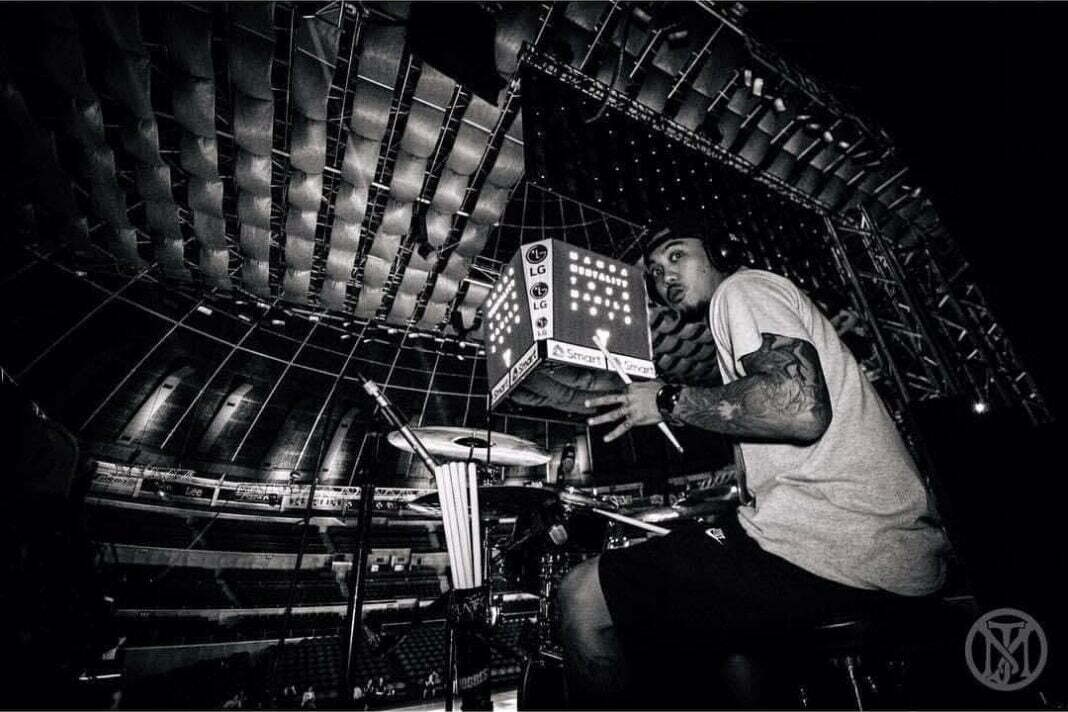 Musicians are like travelers, nomads if you will. They go for spontaneous misadventures, taking the wildest concepts and ideas and go run around with it. One’s beginnings don’t mean that’s the path he’s headed- through experience and daring the unimaginable, one creates his own musical journey and comes into his own.

Meet Macky Brillantes of Motherbasss. I have known him for years as the rap-metal/hard rock drummer for ZOOOM. In the same batch as Greyhoundz, Queso, and Slapshock, he then went on to perform with Saydie whom we shared stages with for quite a time.

He now holds the beats for Motherbasss with Nix Damn P. Not to mention doing double duties with Stickfiggas. Though far from his rock origins, he applies his unapologetic rock drumming style to the plate with much zeal and energy that one can groove and mosh at a drop of a hat.

I’ve recently caught up with him to know what’s up. From his rock past, to his present with Motherbasss among other things:

First off, how did Motherbasss start out?

It started out with a jam. Nix and I have known each other since grade school but we were never friends. We went to the same college as well. After that, we’d always bump into each other on several occasions, mostly when I go out clubbing. So there was this one night where I went to support a friend for her T-Shirt drop, and Nix got there early since he was DJing for the event. We just did a quick catching up over one drink. He mentioned that he sees me being recently added to the Stick Figgas lineup, and if I’m down to jam with him and share ideas. I can say that the stars just aligned cause at that point in my life I was really open to exploring music more than ever. So just a few days after that night we met up and jammed, and scored our first club gig like a week after.

Coming from a rock background with Zooom, Saydie, etc., how does that play out with having a DJ Nix Damn P for a collaborator/bandmate?

I don’t know how to explain it but working with Nix just came easy to me. He’s really fond of my playing and I’m actually surprised. I guess from his perspective, my characteristics or background as a rock drummer performing hip hop or electronic beats give out a certain flavor. Also with his being one of the most diverse DJs in Manila, that opened me up to a lot of different types of music.

It’s actually funny because when we started out trying to write our own songs, we bought this gear, Maschine by Native Instruments. The way we were using the gear was different from each other. I guess his approach was from a DJ standpoint, and I was using it from a band person standpoint. It’s different every time cause we never really plan what to write. We just try to jam and capture something and eventually transfer it into a proper recording studio for further developments.

Being Jordan Manila ambassadors must be sweet! How was that event of yours last weekend? Can you share what was all about?

Oh man, it hasn’t really sunk in, to be honest. I mean, we’ve been working with Nike for a while now and they’ve been very supportive of us. Actually, we were supposed to perform at the Jordan Manila Store opening last May 2020, but the pandemic happened and plans have changed. So now we got booked for the first anniversary instead. It’s already a huge pressure representing a brand like Nike.. but Jordan?? Bruh!!! We totally felt the need to step it up. So we all agreed upon the idea of writing new music exclusively for the anniversary.

Given a short period of time to create and record and perform the songs and execute them to our own standards as Motherbasss, I think it’s safe to say we upped our game another notch and it feels great to be able to share that whole experience to the world. As a musician, this feat is right up there for me.

How do you see music, streetwear, and sneaker cultures feeding off on each other? What’s your take on it?

We inspire each other. Just like how athletes are hyped up by music. We are all related and music plays a key role in these cultures. People using different mediums for collaborations are happening more than ever.

It’s good to always have that dialogue going on around and across these cultures, platforms, and industries to maintain a healthy competition. As long as everyone eats!!!

Being a drummer, can you name your top 3 best drummers of all time?

In no particular order: Ginger Baker (Cream), Jon Theodore (The Mars Volta, One Day as a Lion), Chris Dave (The Drumhedz). Honorable mention: Reli de Vera (Sinosikat?, but I love watching this guy do open jams)

Coming from a rock/metal/rap metal background, was it a challenge to transition to this type of music?

Of course, it can be hard at times but I guess through experience, and man… we were doing rap-metal when rap-metal wasn’t a thing yet so I guess yeah that experience kind of gave me an edge at least mentally not to be fazed by the idea of crossing genres and just opening up yourself to the music. Also shoutout to the maestro, Michael Alba. I was already a musician for over ten years when I took his drum classes and man it has elevated my musicianship technically and mentally.

Future plans for Motherbasss? Shoutouts to your followers?

What’s next for Motherbasss?? I guess we gotta tour our Infinite Afternoon album once things open up and live shows come back. For sure we’ll keep creating music and more. More collaborations with other artists and brands as well.

We’re also building our own label, Very Done. We got DJs, visual artists, other creatives and younger musicians on the come up and we’re just inspiring and pushing each other to keep working on our craft. Hopefully, we can tour with the whole roster in the near future.

BIG BIG BIG SHOUTOUT to our families for believing in us and supporting us. Being a musician in the Philippines is freakin’ tough so BIG THANK YOU to each and everyone who’s supported us along the way and we pray that you’ll find your way in this life as well 🙂

Thank you Macky! Do checkout Motherbasss on Spotify.

In other news, here’s the lowdown on what Filipinos have been listening to on Spotify for 2021.