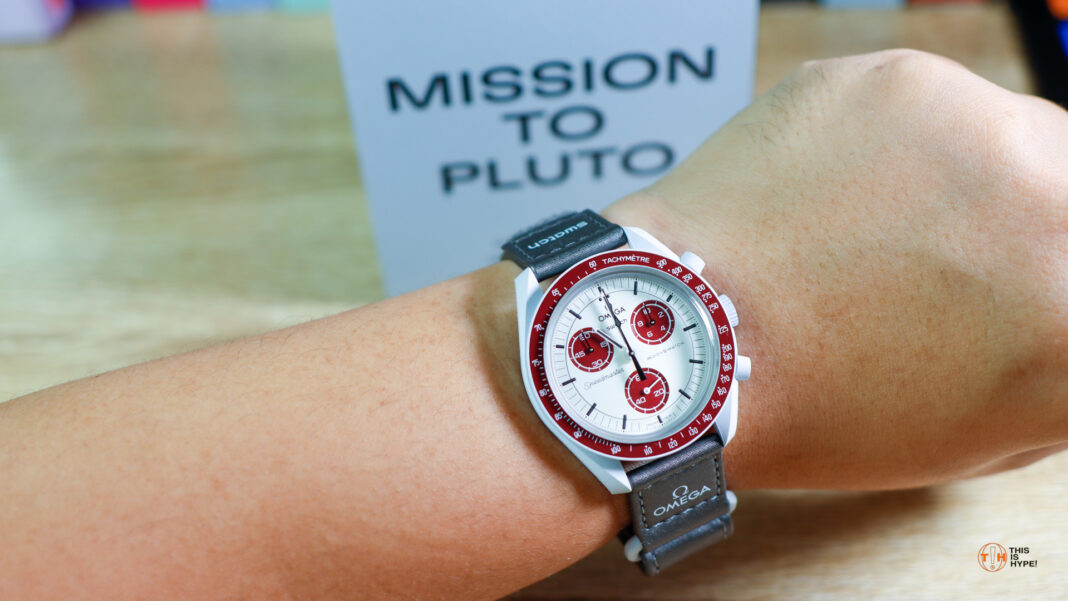 When Omega announced that they are collaborating with Swatch for a Speedmaster Moonwatch for the masses, practically everyone went bananas for it. The idea of transforming an expensive mechanical watch that costs around Php 300,000 into one that’s priced like a G-Shock sounded like a compelling and genius idea. I managed to snag the Pluto version of the MoonSwatch for its retail price in Malaysia, and I’m more than excited to review it and share my thoughts on this unusual collab. 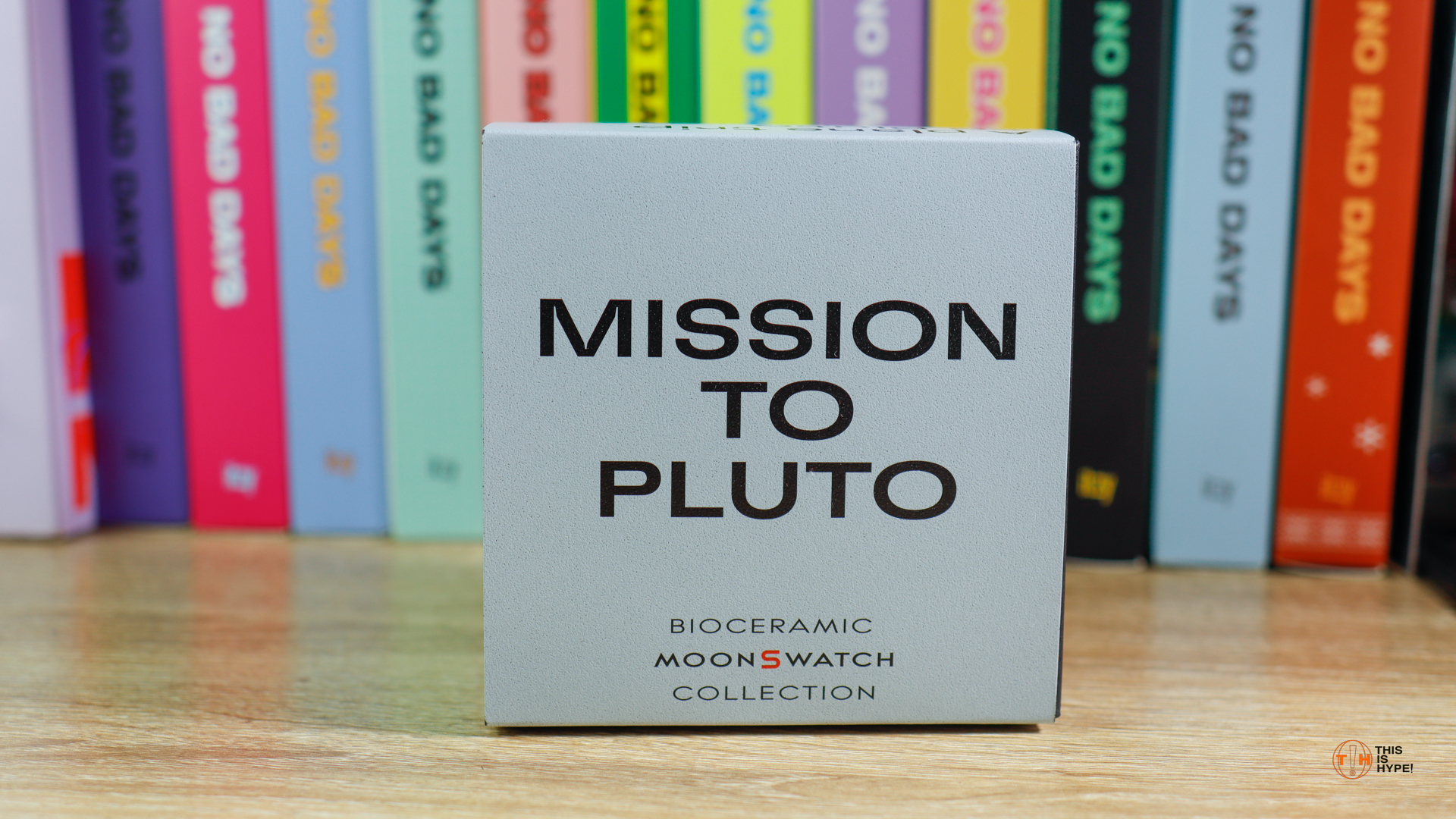 Getting one, however, was a challenge. Given the high demand and low supply of all 11 models, the Moonswatch tends to sell for way above retail–as of this writing, the cheapest Moonswatch you can buy in the resell market is at Php 25k, and the actual retail price should be around Php 13k-15k depending where you bought it.

Trying to get one locally is a challenge: the MoonSwatch is only sold in Rockwell in the Philippines, and you’ll have to play a guessing game (on top of lining up) to get the chance to secure one. Your next best bet is to source it abroad–which was what I did when I had a business trip to Malaysia.

Unlike in the Philippines, you can simply walk inside a Swatch store and ask the salespeople nicely if they have a MoonSwatch in stock. Luckily, the store that I visited had the Jupiter and Pluto versions of the MoonSwatch, and given that they have a 1 piece per person policy, I ended up getting the Pluto version. 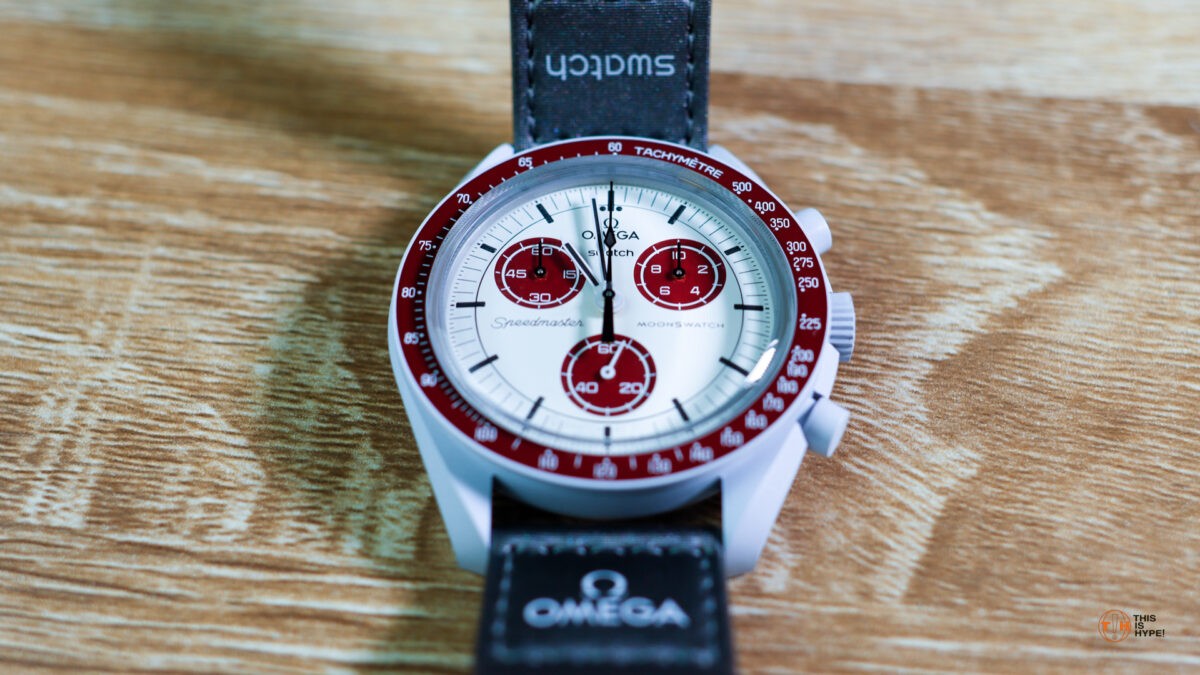 The packaging is nice for the MoonSwatch with the Omega X Swatch branding and a few fun facts about Pluto (every edition has a few snippets about the planet they are representing). The inner box has a rather unique way of opening it–and is reminiscent of how you’d open the box of any expensive watch. Inside it, you have the documentation (instruction manual, warranty card, and a pamphlet talking about all 11 models of the MoonSwatch) and the watch itself. 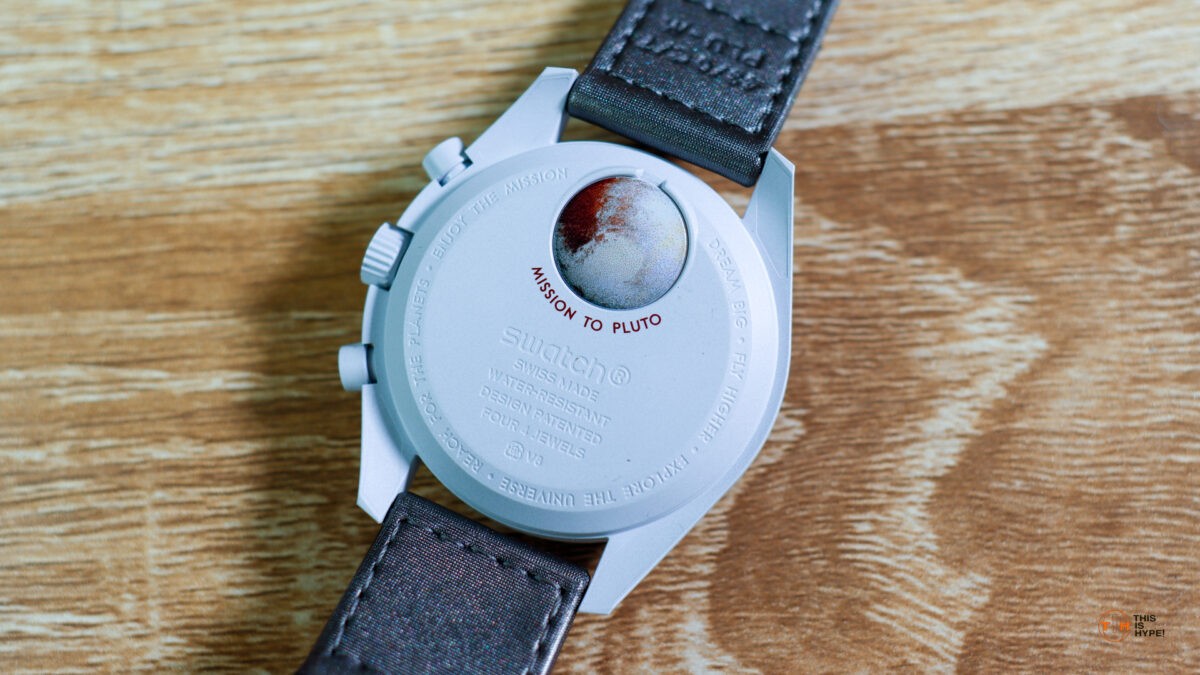 The Pluto version of the MoonSwatch has a light gray body, wine red for the subdials and bezel, beige for the dial, and dark grey for the velcro strap. The body is made from Swatch’s Bioceramic plastic material, making the MoonSwatch feel so light, it’s like having a toy watch on your wrist. I’d even argue that the MoonSwatch is lighter than your average G-Shock. If you are into watches that are featherweight on your wrist, this one is definitely a good choice. 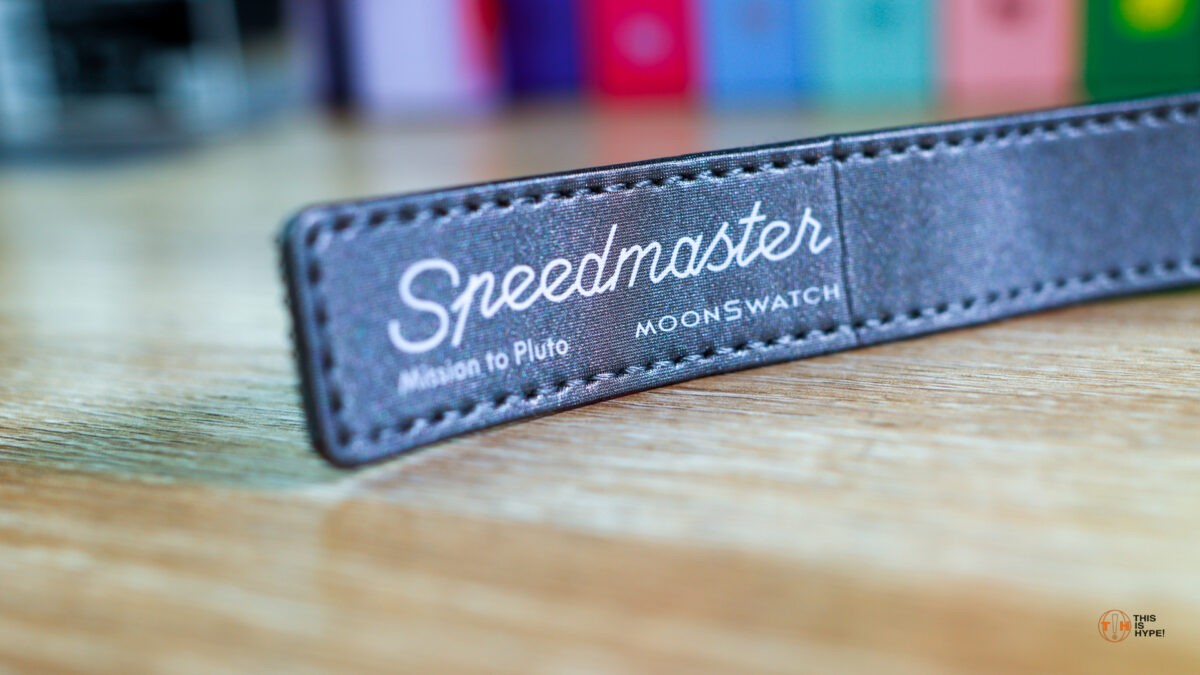 The back of the watch is something you’d expect on a Swatch, though you get a graphic of Pluto for the battery cover and additional branding. You get a velcro strap with it that also has Omega and Swatch co-branding and the iconic Speedmaster typography. The strap has a hook-and-loop design that is pretty straightforward to use, though it remains to be seen if Swatch will offer replacement straps in the future. If not, there are plenty of aftermarket strap options for the MoonSwatch. 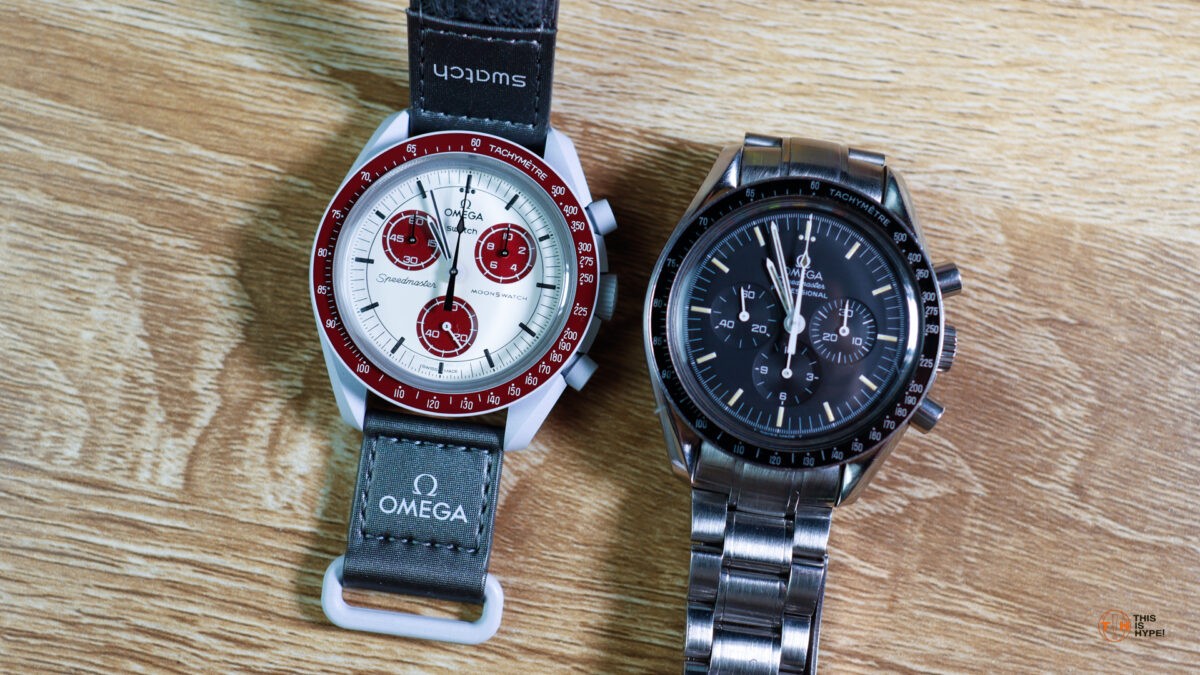 A good homage to the Moonwatch

Without a doubt, this Omega x Swatch collab does get the job done in making the MoonSwatch a homage to the original Speedmaster Moonwatch. While it is smaller at 38mm (the Moonwatch has a 42mm case), Swatch was able to properly replicate the dial design of the Moonwatch–including how the subdials are arranged within the main dial–while giving it a youthful look with multiple colors to choose from depending on your favorite planet. 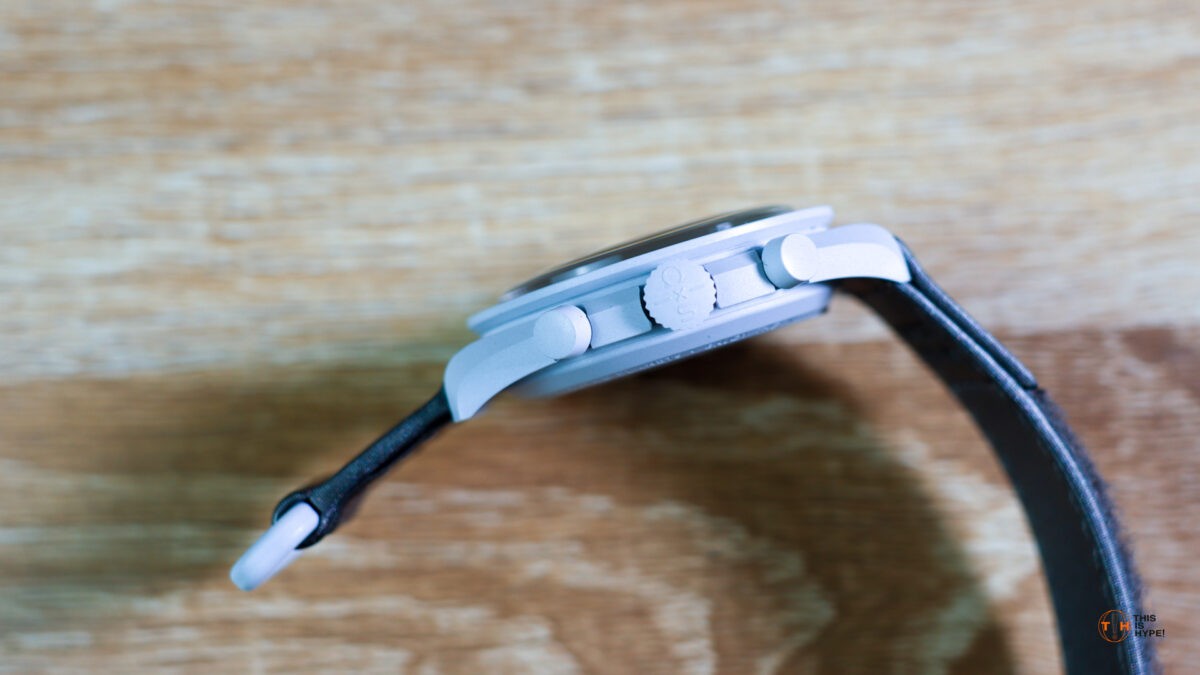 Even the pushers and the crown look similar to the Moonwatch, and we like the Omega X Swatch co-branding on the crown and the dial. The Speedmaster and MoonSwatch branding are nice additional details to the dial, emphasizing that this is a one-of-a-kind collab.

Being a quartz watch, you don’t get the smooth sweeping hands for the seconds subdial and the seconds timer when you operate the pushers. Seeing those hands tick instead of sweeping through the dial is amusing for me, as it does add to the uniqueness of the MoonSwatch. It’s not every day that you see a watch with a stopwatch feature to have a ticking seconds hand instead of a sweeping one. 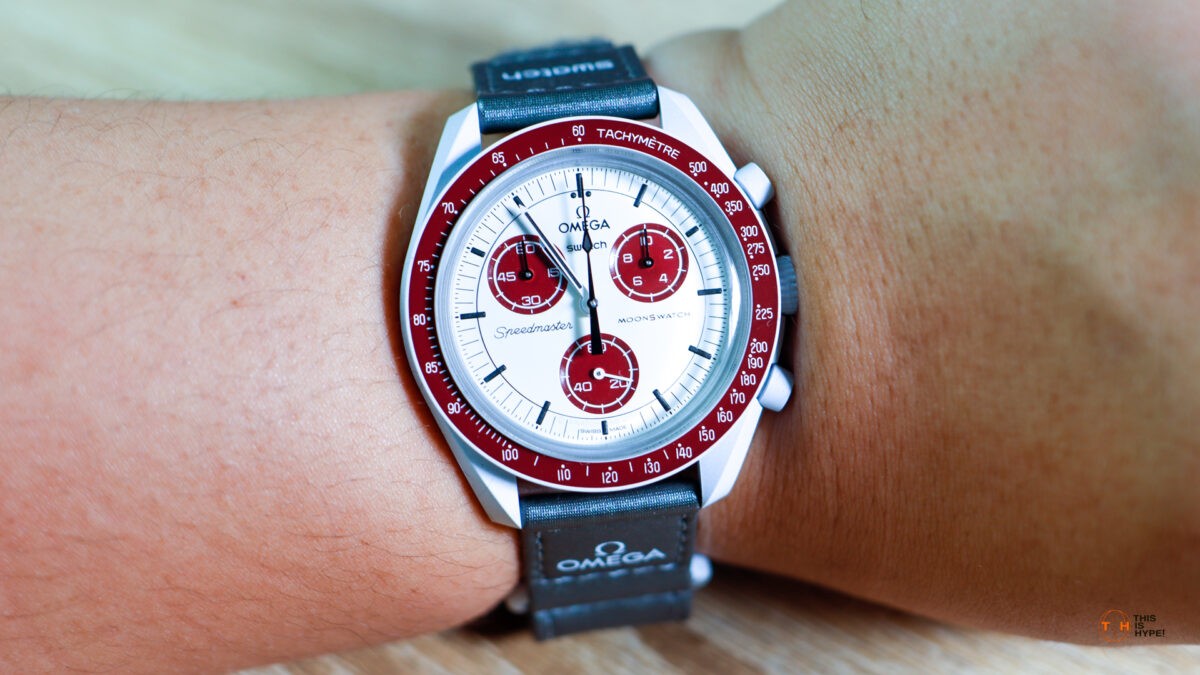 Unlike its more expensive brother, you don’t expect top-notch quality with the MoonSwatch–especially since this is a watch that’s made for the masses. I’m still wary of the overall quality, especially with the issues I heard about all MoonSwatch models ranging from the color of the watch body staining your skin to the pushers being fragile. I don’t know about the durability of the velco strap as well, but that remains to be seen in the future.

There’s also the concern on whether this move devalued Omega as a brand, but I don’t think it should affect them for two reasons: first, Omega is part of the Swatch group (which explains why the collab was made possible), and second, Speedmaster watches in the secondary market have increased their value despite the hype for the MoonSwatch. For reference: the Moonwatch Hesalite (the one that’s best associated with being used on the moon) used to cost around Php 250k back in 2019, and current prices for it are now above Php 300k–and that’s despite that the MoonSwatch does exist. 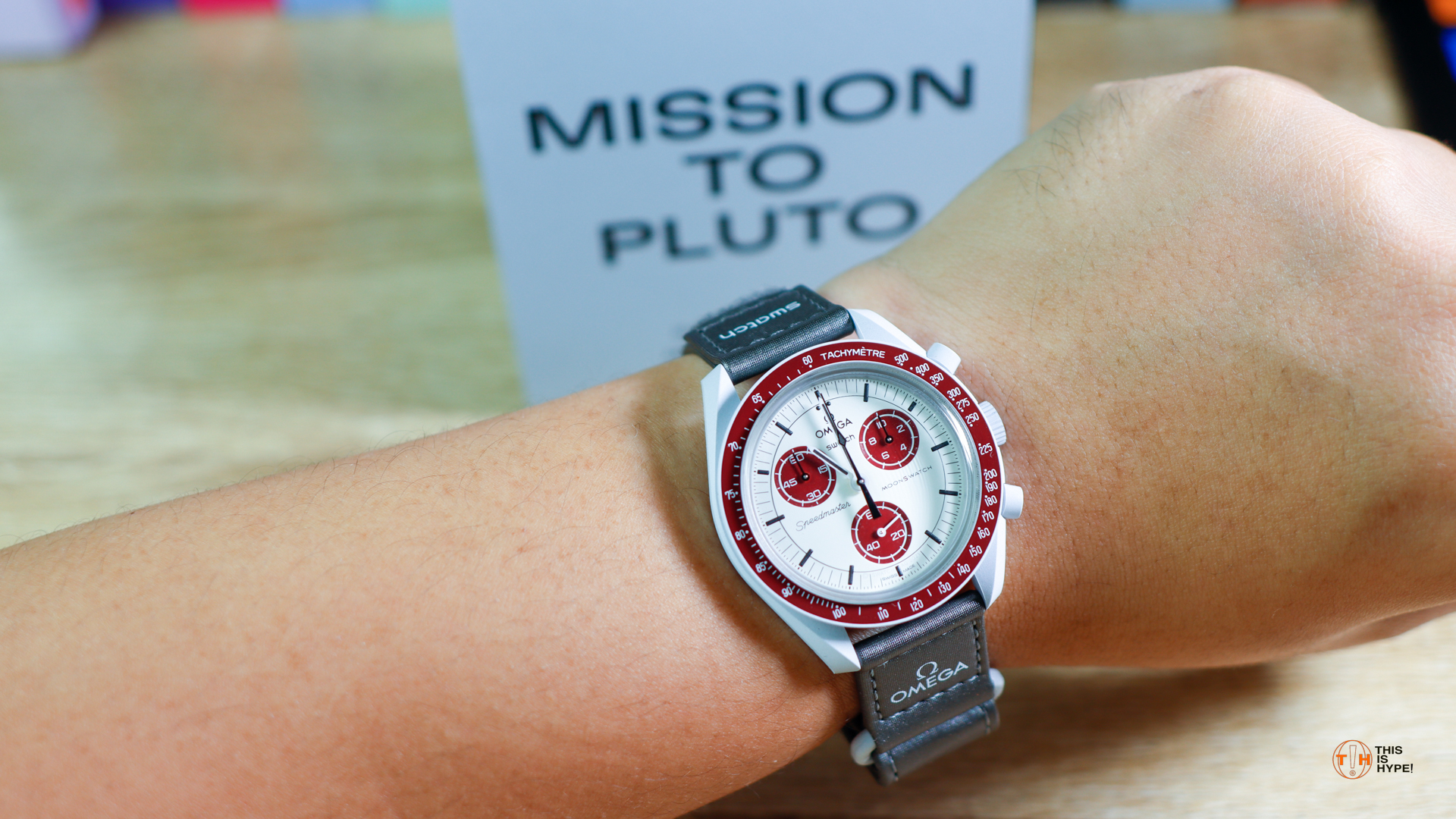 Trying to make an expensive and iconic watch accessible to the masses is a risky move, and both Swatch and Omega were willing to take that risk. While it does feel more like a toy than a watch that you can use as a daily driver (given the issues that are associated with it), the MoonSwatch is a novel proof-of-concept that shows that people can get access to something that’s close to Omega’s iconic Speedmaster Moonwatch without spending too much and without resorting to fakes.

As for how much you should pay for the MoonSwatch, I’d still insist that one should ONLY buy it for retail. While there are resellers that try to sell the MoonSwatch for double (or even triple) its SRP, I honestly don’t get the sense of paying that much for a watch that looks and feels like a toy.

Overall, our review of the MoonSwatch shows that this risky move by both Swatch and Omega did a great job as an absurd proof-of-concept-turned-reality, though there are still a lot of things that need to be refined should other brands plan to do a similar type of collab.