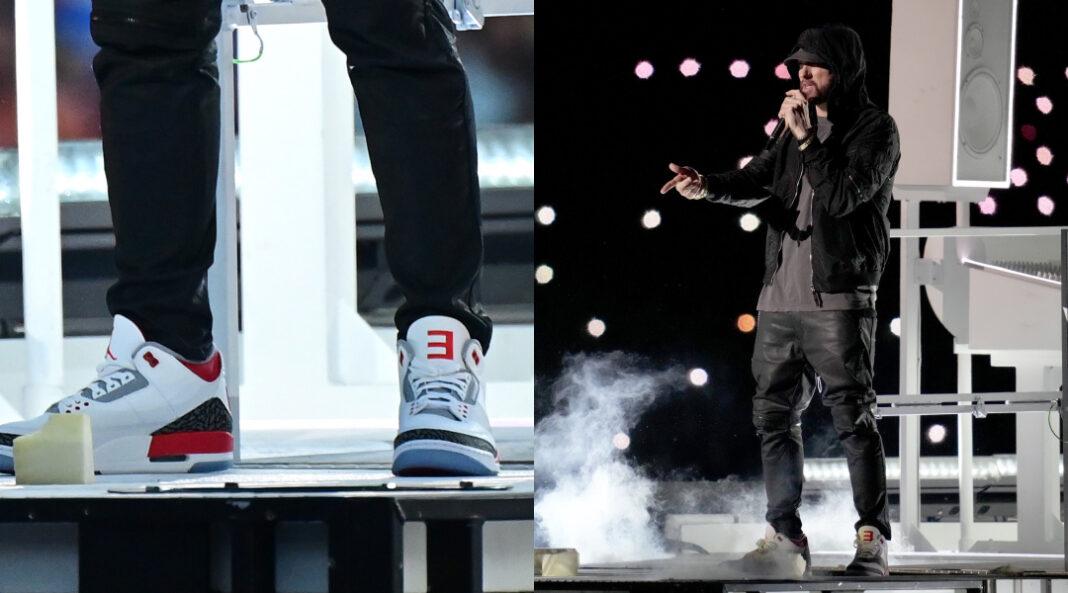 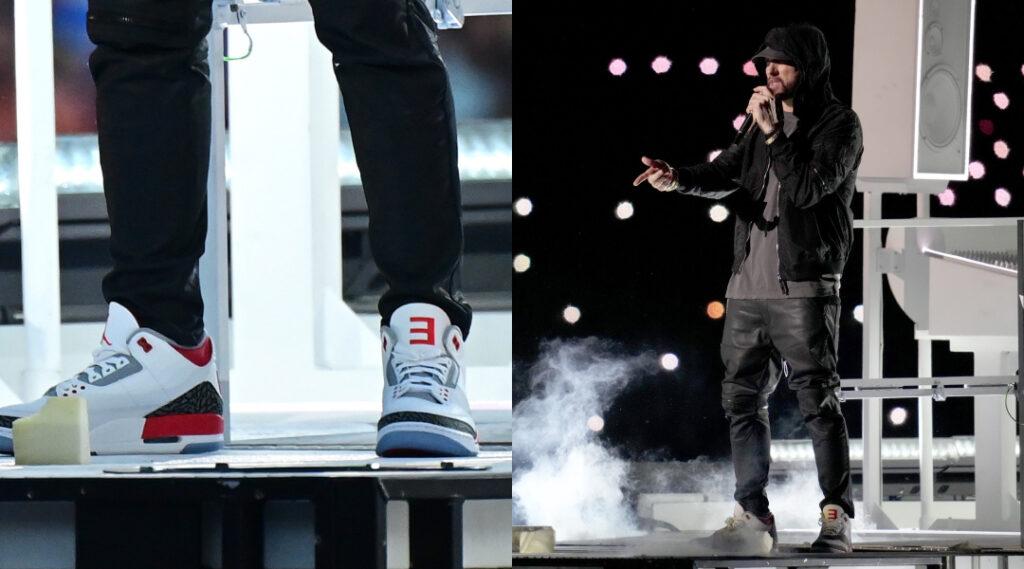 Eminem has been decked out in Jordans and Nikes for as long as we remember, giving the rapper several sneaker moments that fans will instantly recognize. A self-confessed sneakerhead with an attitude, there is something different with Eminem whenever he busts out a new pair with a lit outfit. It’s just an edgy street vibe that everyone latches on to, including the non-fans who just care on what’s on his feet. 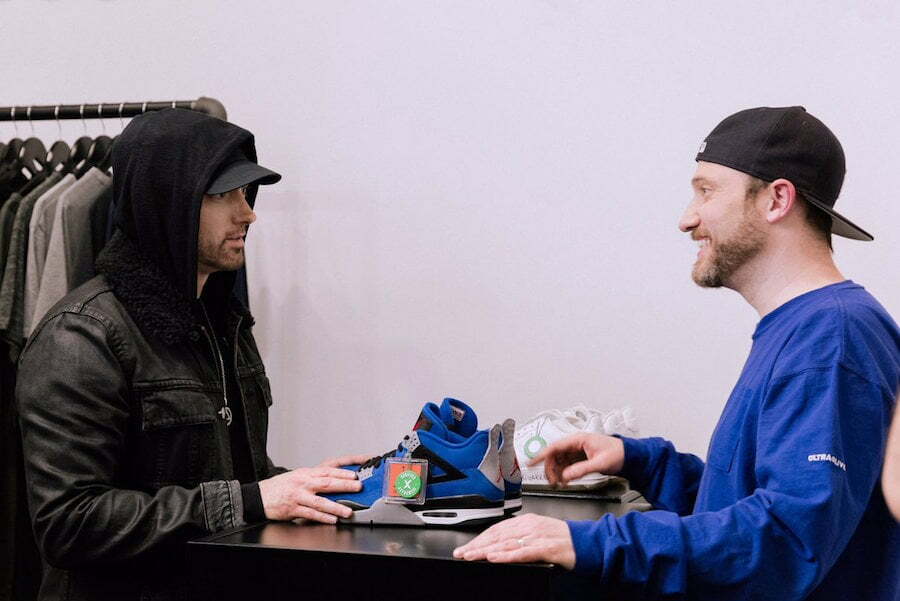 Fresh from his Superbowl halftime show with the Jordan 3’s that show a lot of promise, we look back at some top draws from Eminem’s sneaker arsenal. 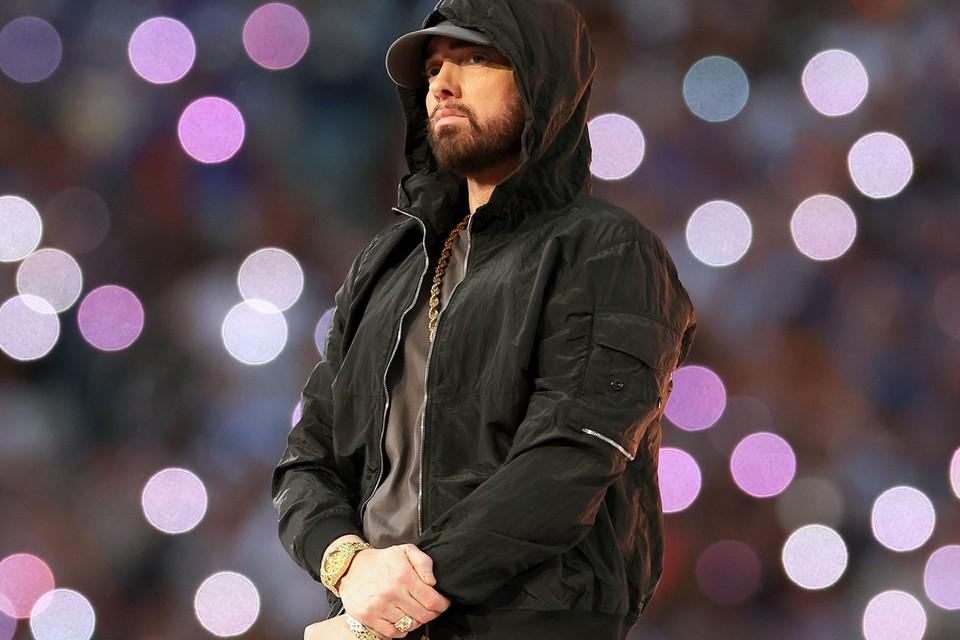 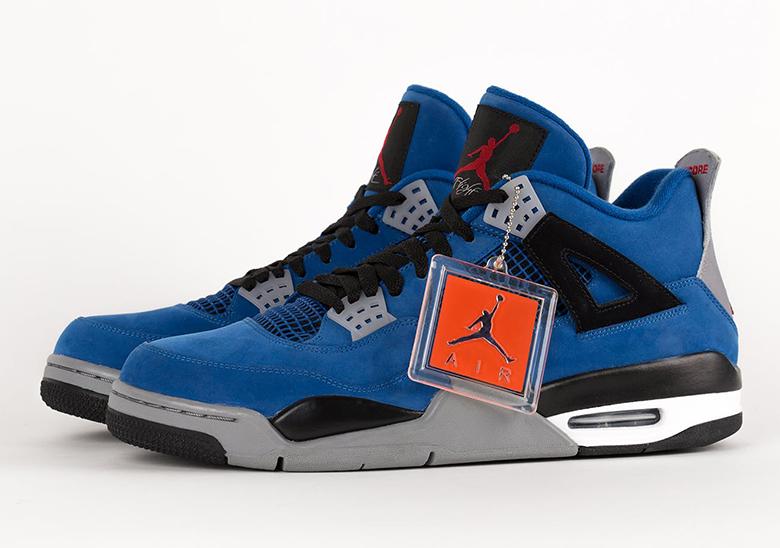 Rumored to be 50 pairs in existence, the “ENCORE” Air Jordan 4 was a friends and family exclusive with a small amount allotted for contest winners. Marshall’s first ever Air Jordan 4 is decked out in a vibrant blue suede upper with contrasting red, grey and black accents. In our opinion, one of the best collabs under the Detroit-bred rapper’s shoe resume – EVER. 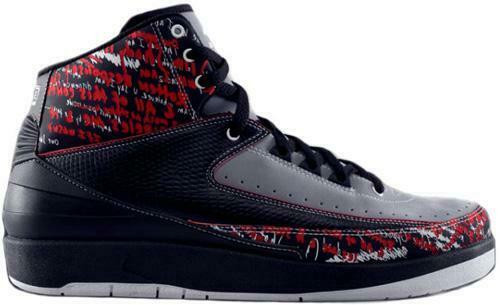 Being Marshall’s first ever pair of Jordans growing up, the Air Jordan 2’s are his favorites and organically led to this collaboration that coincides with his 2008 autobiography “The Way I Am.” Limited to 313 pairs in honor of his hometown of Detroit and released via the Air Jordan Flight Club, this pair holds up to this day as one of his best. 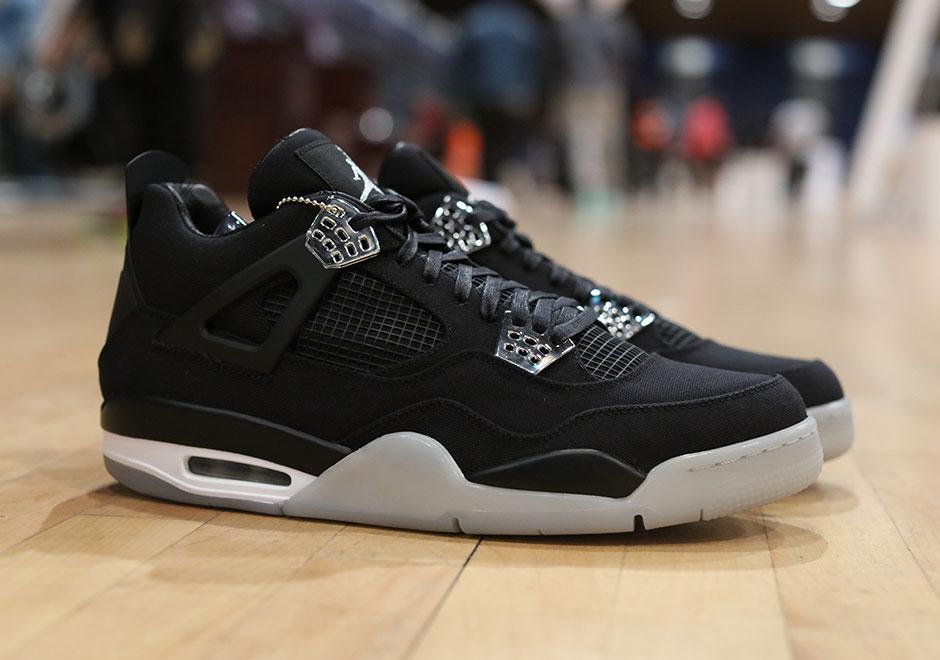 Talk about stealthy with workwear thrown in. The Eminem Air Jordan 4 X Carhartt comes in with a Carhartt twill upper, chrome accents, waxed laces, leather interior and a translucent outsole. Coming from Eminem’s affinity for Jason Voorhees, one of the heeltabs bear the horror character’s likeness while the reverse “E” can be found on the other. 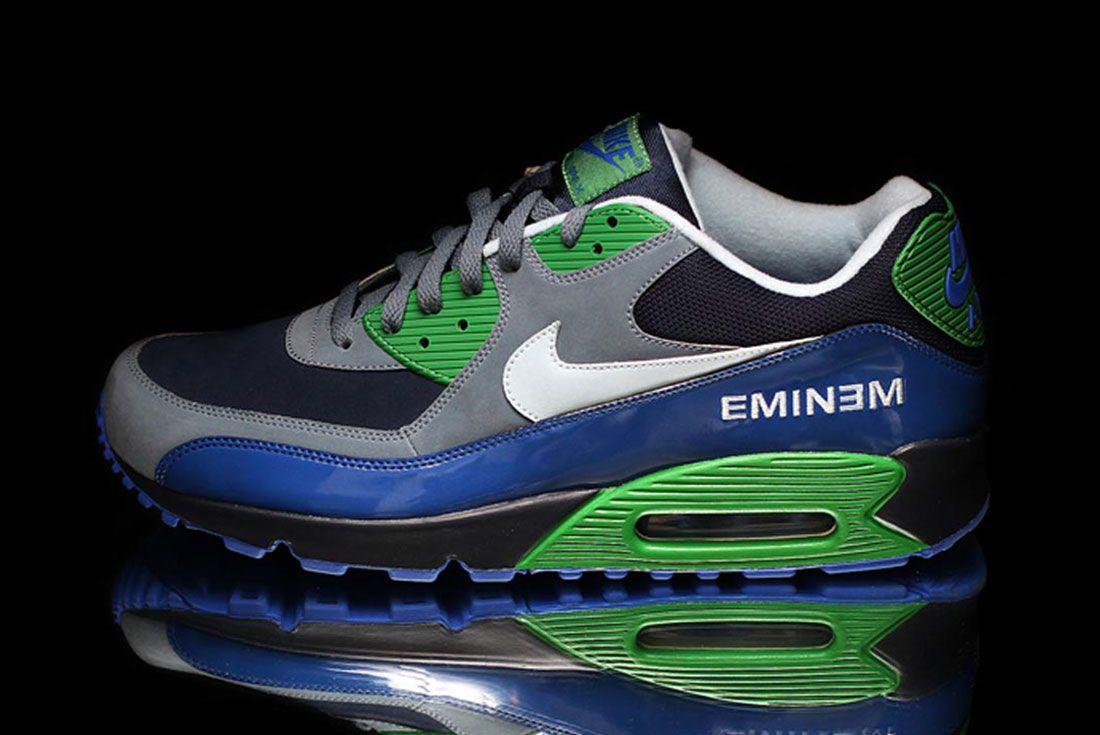 Only made for a Charity event, The Charity Air Max series included an Air Max 90 co-signed by Eminem himself. With only 8 pairs in existence, this particular Air Max 90 features a patent, suede, and leather build with trademark Eminem branding stitched into the heel. 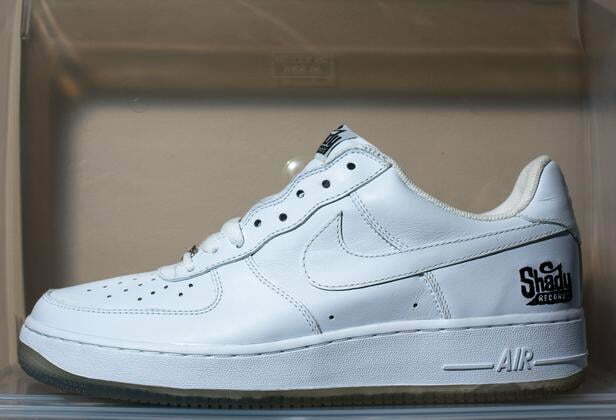 Probably the last Air Force 1 given to Em’s record label Shady Records back in 2004, this shoe bears the label’s logo on the heel and boasts of a translucent outsole. Simple but nicely executed, the shoe reminds us of baggy denim and durags. 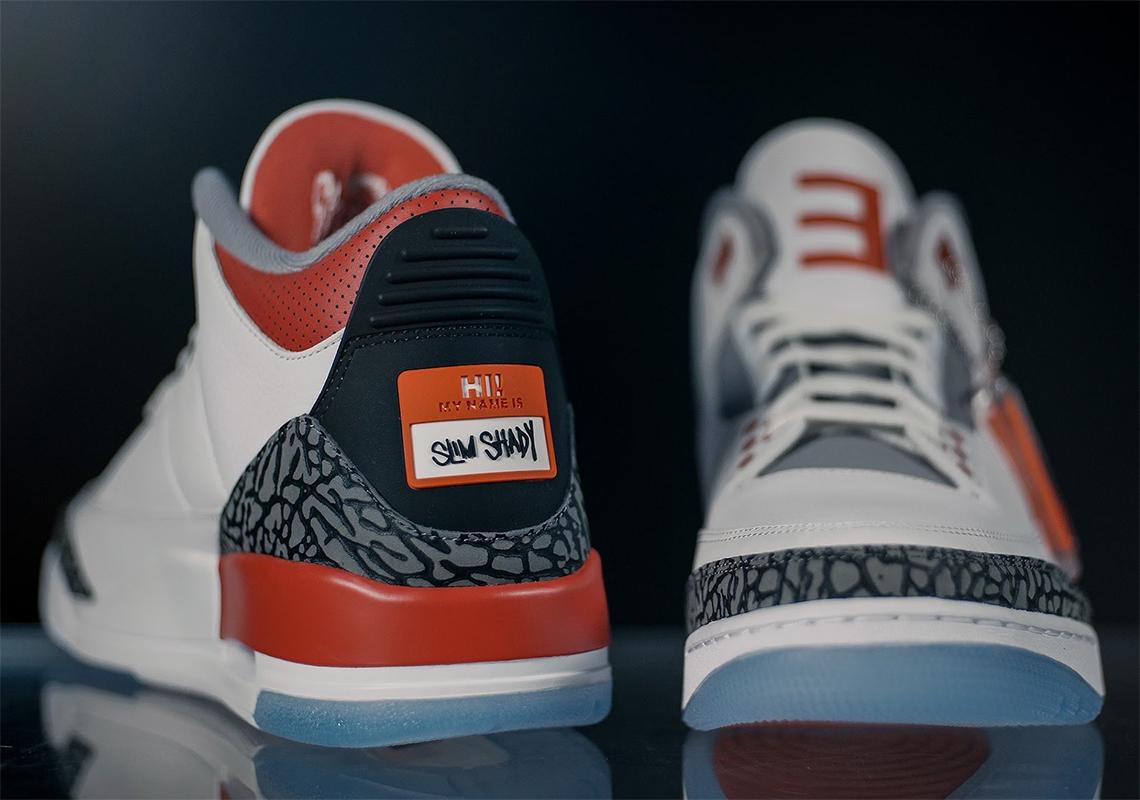 To wrap up all of his sneaker moments, Eminem pulled off a big, big surprise when he took the Superbowl stage in a pair of Air Jordan 3 PEs in the white, black, and red colorway. The left tongue bears his backwards E logo while the heel logo bears a “Slim Shady” nametag. No word on this yet, but we’re betting that it will be a raffle / charity exclusive which Em is highly known for when it comes to his collabs.

Still can’t get over the Super Bowl Half Time hype? Read more on why it was epic here!