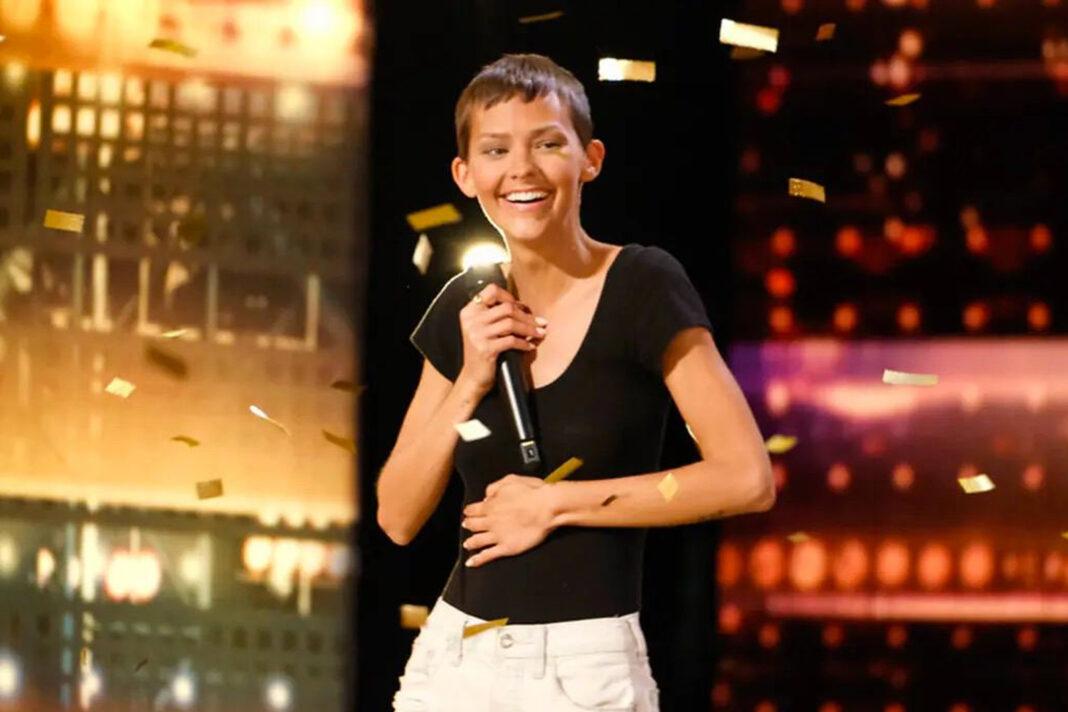 Nightbirde, real name Jane Marczewski, took social media and music charts by storm over the weekend after her audition on America’s Got Talent instantaneously became a viral phenomenon. Part of the reason is the fact that despite having cancer three times before the age of 30 (she’s still battling her third round of cancer as of her performance), she still tries to look on the bright side, which by itself, shows an incredible force of will despite overwhelming odds. What sets Nightbirde apart from other contestants who have auditioned is her authenticity and relentless disposition to fight against her current predicament.

The Ohio-native, auditioned sporting a simple black tee and white pants with her cropped hair resting lightly on her head and a huge infectious smile. Her appearance gave slight hints to what she may have gone through but everyone was surprised to find out that her battle with cancer was not yet over.

The artist courageously opted to sing her original song entitled It’s OK and the risk certainly paid off as she beautifully showcased her story. The aftermath of the performance left the judges and everyone in attendance literally entranced — having a 5-second state of shock before giving Nightbirde a standing ovation. The judges had nothing but praises for the artist, including the harshest critic in the panel, Simon Cowell. The said judge was welled up with so much emotion that it pushed him to grant the artist his one and only Golden Buzzer for the audition process.

Nightbirde is very open regarding the trials and hardships that she is going through since early last year. She was diagnosed with terminal cancer, went through a nasty divorce, and was uprooted from her life in Ohio to move to California for her treatments.

In an interview with Access, the artist expressed her two-fold motivation for writing songs despite these difficult times — to serve as an inspiration for listeners and for a personal outpouring of her deepest thoughts and frustrations. As Jane writes these songs she is able to find solace and inner healing and has become a much-needed voice in the difficult times that we are in.

The song It’s OK in its simplicity carries a heartfelt message that serves as a personal reminder for the singer. “This was a song that I wrote for myself that I needed to hear,” said Nightbirde. The track’s format follows a simple verse-chorus-verse flow and its overly repetitive nature is meant to drive home the point of being a reminder to one’s self that things are and ultimately will be okay.

It’s OK goes beyond a disposition of optimism for its depth along with the eerie, soothing, and captivating voice of Nightbirde showcases raw unabridged emotions. The track is taken to a point where joy and breaking down collide, delivering a moment that cannot be described in words alone. The all-out vulnerability is not a facade located in a simple song but it is clearly visible and felt — exuding endlessly from the artist. In the desolation, destructive and void-filled moments, Nightbirde has found her voice and an anthem for all of us to chant and declare so boldly.

The track was recently rereleased with a stripped-down version produced by Next Level Recording Studios and has climbed its way to the number 1 stop in iTunes.

In our culture today with social media platforms such as Instagram, we are often pushed and are unconsciously told to put our best foot forward — to put out the very best versions of ourselves. The statement “It’s okay not to be okay” is often used nowadays to combat this very culture as a reminder that we aren’t meant to showcase a so-called “perfect” and filtered version of who we are. Nightbirde beyond being an artist is simply a human being who is not afraid to be herself and is in constant search of all the aspects that make her who she is. “It’s important that everyone knows that I am so much more than the bad things that happen to me,” says the artist.

The vulnerability and unfiltered way of communicating for Jane goes beyond her songs and into writing in general. In her blog post back in March entitled God is on the Bathroom Floor, she leaves everything out in the open. The blog is an internal cry expressed for all to see as she declares — the source of her strength, the questions asked that are left unanswered, the frustrations, and the cynical thoughts that consume her.

Call me bitter if you want to—that’s fair. Count me among the angry, the cynical, the offended, the hardened. But count me also among the friends of God. For I have seen Him in rare form. I have felt His exhale, laid in His shadow, squinted to read the message He wrote for me in the grout: “I’m sad too.”

It’s not often that we get an artist who is able to directly pierce through the very core of what makes us human. It is unfathomable and for some,  foolish to witness someone with so much pain to be so optimistic and filled with utter joy and hope. In the latter part of her audition, Nightbirde boldly declared this statement: “I have a 2% chance of survival. But 2% is not 0%; 2% is something! And I wish people knew how amazing it is.” It may look as if it’s false hope but after a moment of ruminating it further, dare we say that Nightbirde shows us true peace beyond understanding — needing no room for explanations.

For more articles on music to add to your playlist: