Being a movie and TV show fanatic myself, I wanted to evaluate and unearth a specific trend that was evident in some of the stories that we witnessed this past year. As I skimmed through the endless list of offerings that we received this 2021 for my own hypes trend, I stumbled upon an occurring theme or message — the blurred sense of morality in movies and TV shows. In my Hype Trends for 2021, I will be discussing three ways on how movies and TV shows were able to highlight a blurred understanding of morality and the effects of such stories on us all as viewers.

Don’t get me wrong, this isn’t, by all means, a new phenomenon that we just encountered this past year however it was surprising to see the impact and almost repetitive nature of such ideas. The interesting nature of this chosen morality dilemma as shown in films is that it took on various forms which allowed variety and creativity to shine.

Gone are the days of simple characters who are either purely good or purely evil. What we get now are morally conflicted people whose integrity, principles, and belief are tested and shaken to their very core.

Just a few days ago I saw Netflix’s Don’t Look Up and witnessed a variety of plot points that took a stab at our priorities and standards as human beings. One of the most interesting parts however came from Leonardo DiCaprio’s character, Dr. Mindy. I found myself getting irritated with this character’s flawed nature and susceptibility to shift his supposedly strong ideas. I found him to be a weak person only to be awakened by the human aspect of it all. I realized the role and power of films and shows at that very moment. They serve as a mirror especially in aspects or characteristics in ourselves that we cannot see. That’s when Dr. Mindy became the most relatable character in my books because admit it or not we too have found ourselves tested and shaken regarding our beliefs and principles at least once in our lifetime.

Just recently as well, we are got an ongoing onslaught of films that question our morals and belief. Let’s take Midnight Mass and Hellbound as an example. If you have a slight inclination to the plot or central themes of these shows, it’s an immediately given fact that morals will be questioned especially due to the presence of religious institutions. In both these shows, religious groups are brought in to be questioned by us the viewers, and our perception regarding them, based on their moral standards. We actually see the twisted nature even in those who practice religious traditions to the point that they even come off as antagonistic or evil in these shows.

The Bad Guys Are The Heroes Phenomenon

I remember a time when movies depicted heroes and villains so plainly that they were distinguishable from one another. It was simple. Nowadays, there is complexity in characterization and the question of morality isn’t anymore seen as black and white. Our hero at times will battle his or her inner demons as much as the so-called villain reaches a moment of epiphany and moral redemption. It’s the redemptive nature of the antagonists that I find very interesting. We see this so clearly in Disney+’s Loki who has an entire series dedicated to his journey of self-reinvention and justification. We can finally see the breaking of a character from a social label as well where he now defies the role that he is to play as a villain. This again is a very common archetype in story-telling, one that is referred to as the anti-hero. We have seen this from past films such as Despicable Me and Shrek and more recently anti-heroes or villain origin stories such as Cruella. We see and journey with our main character in these films who we either know aren’t supposed to cut it as the hero or star of a show or who have qualities that aren’t supposedly heroic.

The more interesting trend however is how films and TV shows depict clearly wrongful actions such as robbery and the intention to follow what our society calls criminals as the main characters of a story. This year we were given the Money Heist finale, The Suicide Squad, and Army of Thieves, just to name a few, that support the “bad guys are the heroes” storyline. It’s exciting to witness these films despite us knowing the morally twisted actions of our characters. The question however is why is there really such a thrill and entertaining value in watching morally wrong actions from our protagonists?

I believe that there is and has always been a natural and understandable appeal to actions that are considered wrong, taboo, or theologically speaking, sinful. That’s why movies with R-ratings are made and viewed by people the violence, sex, horror, drugs, and everything under the sun that is considered to be immoral, sells so easily. We don’t necessarily seek to do such wrongdoings but seeing them on screen adds a sense of thrill. Therefore when we follow a group of ragtag robbers there is an instant excitement factor. It’s not relatability in this case that appeals to us but the excitement of witnessing something outside our norm.

The second reason for such an appeal in antagonistic actions found in our protagonists is the redemptive transformation or lack thereof that occurs. We get reeled in to see how it will all play out. In Money Heist, I was one of those who was so desperate to see the ending because I too was sucked into the morality dilemma. On one hand, I have grown to empathize and love these characters but I also had that understanding of the wrongful nature of their actions. This is the reason why such films have continued to trend not only are they exciting but they also allow us to question the sense of right and wrong and if we are to truly cheer for our main characters who are clearly in the wrong morally.

A Misguided Sense of Right and Wrong

Stories have often painted heroes as brave and morally righteous or just beings and despite their obvious flaws in character, all of that somehow fades in the background due to their said title. With the presence of characters such as Clint Barton/Hawkeye from Disney Plus and shows on Netflix such as Squid Game, all of that is truly about to change. The majority of our heroes in the stories that are now available have found themselves struggling with what is truly right and wrong. Again this is where film producers present us with the gray area of morality. 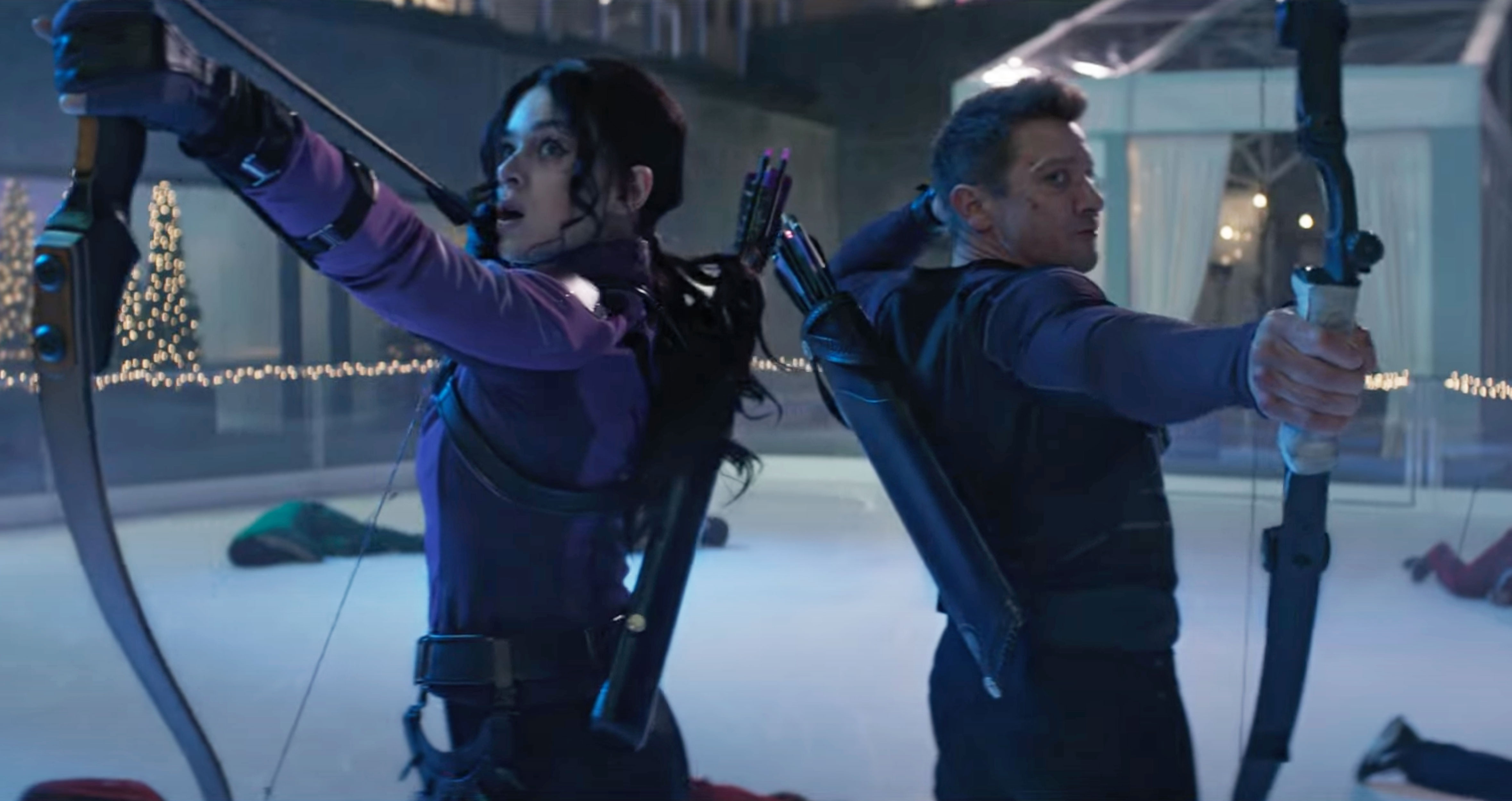 The ways stories now develop as I have seen so clearly this past year is a contextualized version of what is right and wrong. How can we justify murder in a sadistic game which grants us a chance to change our own life as well? It may seem like an easy choice to veer away from what is evil but it’s easier said than done. When faced with life-threatening situations will the decision really be that easy? This was also the year that we witnessed the downfall of heroes we cheered for due to a wrong perception of justice. We saw Clint Barton take matters into his own hands with his alter-ego as The Ronin and his quest to flee from his wrongdoings.

Hype Trends 2021: The Truth Behind Morality In Movies and TV Shows

These are just a few of the examples of how movies this 2021 were able to show a blurry version of morality. In my honest opinion, I crave more of this type of characterization and story-telling. This is exactly what we need because the shifting morality lines are a direct representation of our humanity. We don’t live in a world of clarity where good is easily distinguished from evil. We live in a world where those who we even thought of morally right also face their own dark demons. We however as humans also live in a world where redemption can be achieved or seen right around the next corner. These films don’t belittle evil or good but they magnify and allow us to question our own versions of morality while painting the picture of what justice could be.

Once again the days of a clear-cut picture of right and wrong are slowly slipping away or maybe gone and rightfully so. As I pointed out in my Hype Trends 2021, morality in movies is starting to be painted in a different picture not because they are changing but because it may be about time that we reflect more about it. That’s the power and beauty of movies and TV shows, and it’s not just one to be added as Hype Trends and one that isn’t limited to this year in 2021 but it’s transcendent and transformative in order for us to reach our own sense of morality.

For more on pop culture continue to follow us at This is Hype PH.