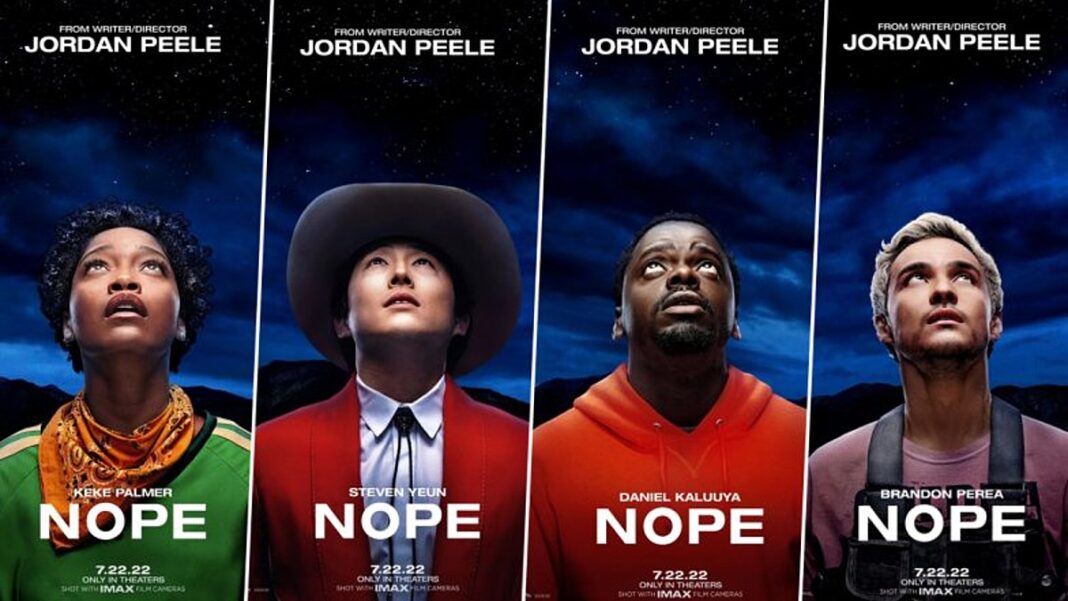 Since his directorial debut with Get Out, Jordan Peele is making a name for himself beyond being a comedian but more of a director who excels in conceptualizing horror movies that one could not imagine. His latest work is Nope, which tweaks Jaws into a movie where you have a morphing UFO as the unusual monster terrifying people, and here’s our review of the film.

While Nope is set to premiere in the Philippines on August 17, we were able to watch it in the US during our stay there (don’t forget to check out our coverage of Brave Girls’ and (G)I-DLE‘s first world tours, both in San Francisco). After countless analyses and debates with our friends who are fans of Peele’s works, we have our review to let you determine if Nope should be on your must-watch list.

To keep this review spoiler-free, we will only focus on the key points of the movie, along with the main characters, while avoiding revealing important events that may reveal the ending of the movie. While we may reference Jaws in this review, we assure you that the reference should not spoil those who have yet seen the movie. 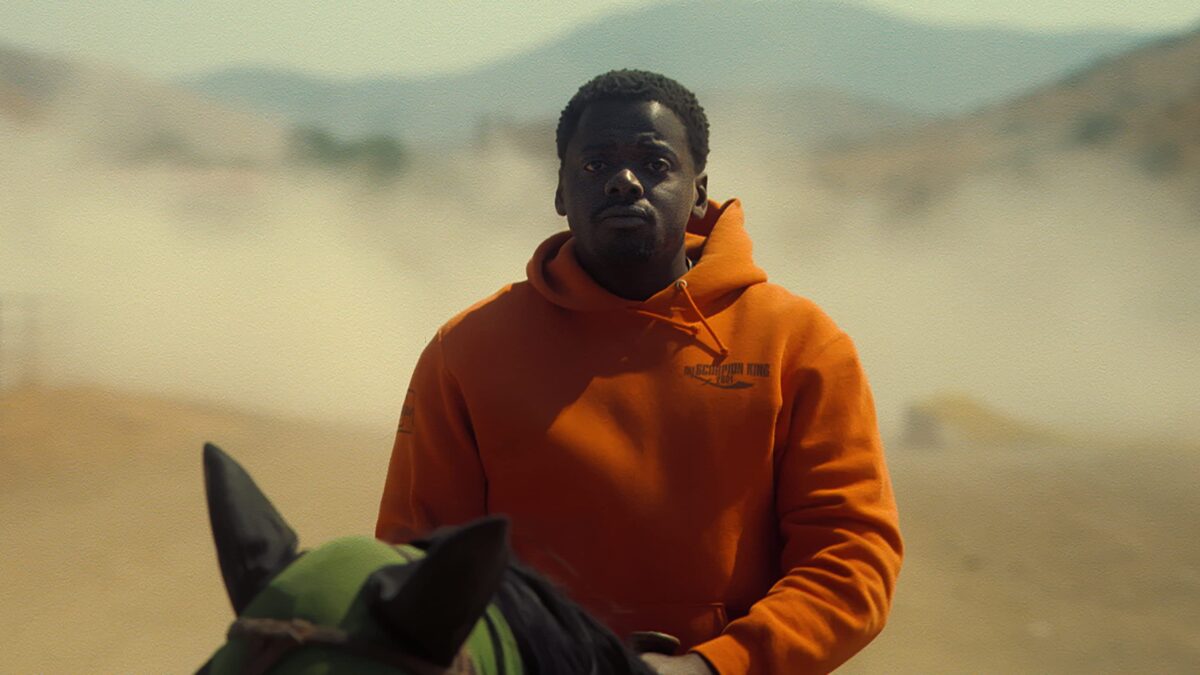 A movie that you should watch more than once

Unlike Peele’s previous works Get Out and Us, Nope has the most complex story plot that Peel has made as a director, writer, and producer of the movie. At first, you might find a disconnect between the intro scene with Gordy the chimpanzee with the life the Haywoods are living as ranch owners and horse handlers for movie productions–but somewhere along the way, there will be a rather murky connection that will make sense.

While the core of the movie primarily focuses on OJ Haywood (Daniel Kaluuya) and Em Haywood (Keke Palmer), it is laden with subplots that would initially make you wonder why they are part of the film – only to realize towards the end that they play an important role in telling Nope‘s complex plot. Watching it once will most likely leave you confused, warranting you to watch the movie the second time to fully understand Peele’s intention.

Despite having a rather unique plot that’s so complex, Nope pays tribute to Jaws with Jean Jacket having similar characteristics to the giant great white shark, and Antlers Holst, a cinematographer played by Michael Wincott, has similar characteristics as Jaws’ Quint in their quest towards unraveling an extraordinary creature terrorizing people.

Peele’s decision to reference Jaws for a good portion of Nope gives the movie a thriller aspect, especially in those scenes when both OJ and Em would run for their lives as Jean Jacket comes close to their area. 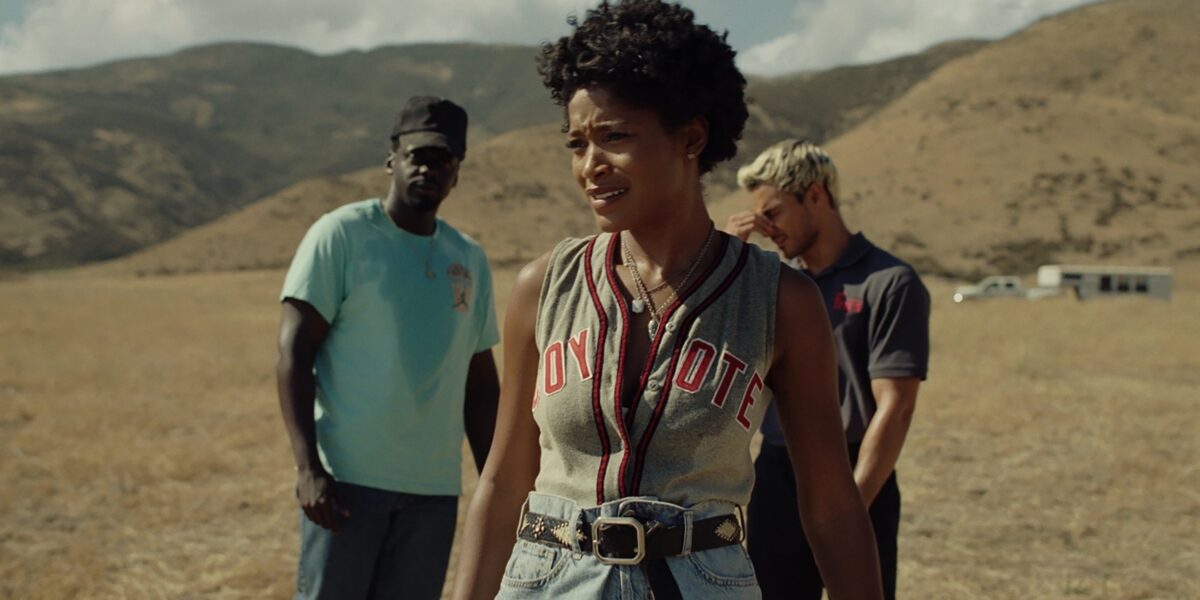 While Peele is more known for his take on horror films, Nope is a very good social commentary on society–particularly with how we deal with wild and extraterrestrial beings. In fact, Nope is an acronym for “Not of Planet Earth” as explained by Peele, referencing the large extraterrestrial being that’s terrorizing the town where the Haywoods live.

Both Haywood’s horses and Gordy represent the animals that humans try to tame–but tend to go back to their wildlife instincts when provoked, causing chaos and deaths in the process. Outside of animals, the general theme of the movie also reflects the flaws of human beings–ranging from masking off past traumas to fabricating stories to give them a sense of achievement.

Peele’s third movie is the most complex one to date, covering different genres ranging from sci-fi, thriller, and horror, to fantasy. While we admit that this is one of those movies where watching it more than once is a must, we appreciate Peele’s expertise in taking horror movies to a whole new level.

That being said, we give Nope a 7 on our Hypemeter: it’s a very complex movie to understand, but the underlying themes are very relevant to all of us today. 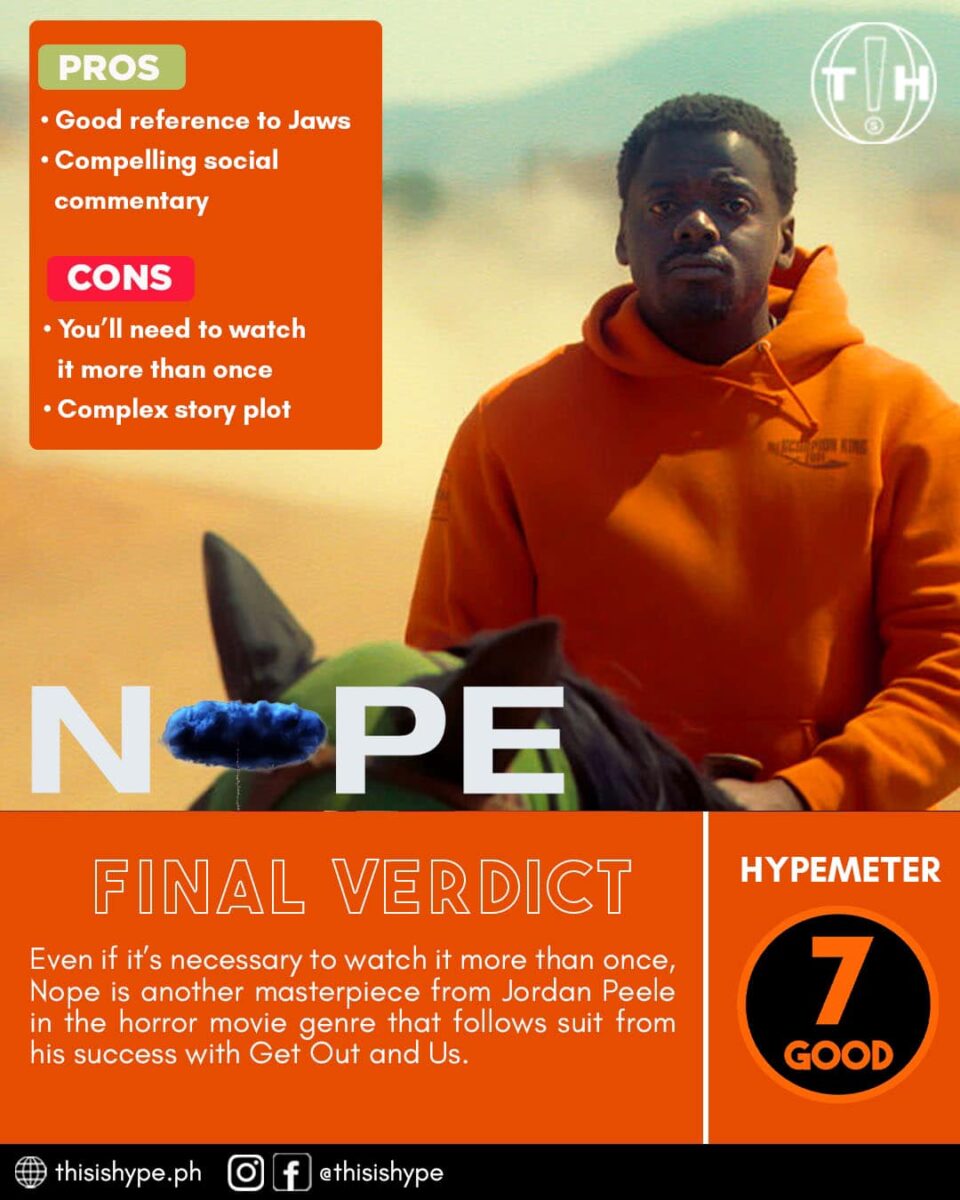