Home Editorial Beast Review: A Fight For Family Against Wilderness and Lions Idris Elba has continuously risen to fame and recognition as of late to the point of being a fan-favorite choice to take on the role of 007 — admittedly having mixed receptions from fans up to this day. Elba’s most recent film however is a doozy of a survival film entitled Beast, which centers on family and the fight for its integrity against ravaging monstrous lions. We took the time to watch Beast in order to review it here at This is Hype Ph. As mentioned Idris Elba has been on a roll as of late, especially in the action film genre with films Hobbs and Shaw, Suicide Squad, and The Thor franchise. He now ventures on in this survival thriller alongside Iyana Halley, Leah Sava Jeffries, and Sharlto Copley. Beast is directed by Baltasar Kormákur (Everest, 2 Guns) from a screenplay by Ryan Engle, based on a story by Jaime Primak Sullivan.

Recently widowed Dr. Nate Samuels and his teenaged daughters, Meredith and Norah, arrive at the Mopani Reserve in South Africa for a vacation and as an attempt for the patriarch to reconnect with his children. Things turn for the worst when the family faces a variety of challenges that ultimately ruin their supposed time of bonding and relaxation. These threats include the presence of poachers and more importantly a ravaging human-killing lion who is hell-bent on stalking and killing its prey.

This review of Beast will be free from spoilers so as to not tamper with your overall viewing experience of the film. Instead, we will fix our eyes on the effectiveness of the story’s premise, the thrilling components and even some of the film’s execution of some of its prominent themes. 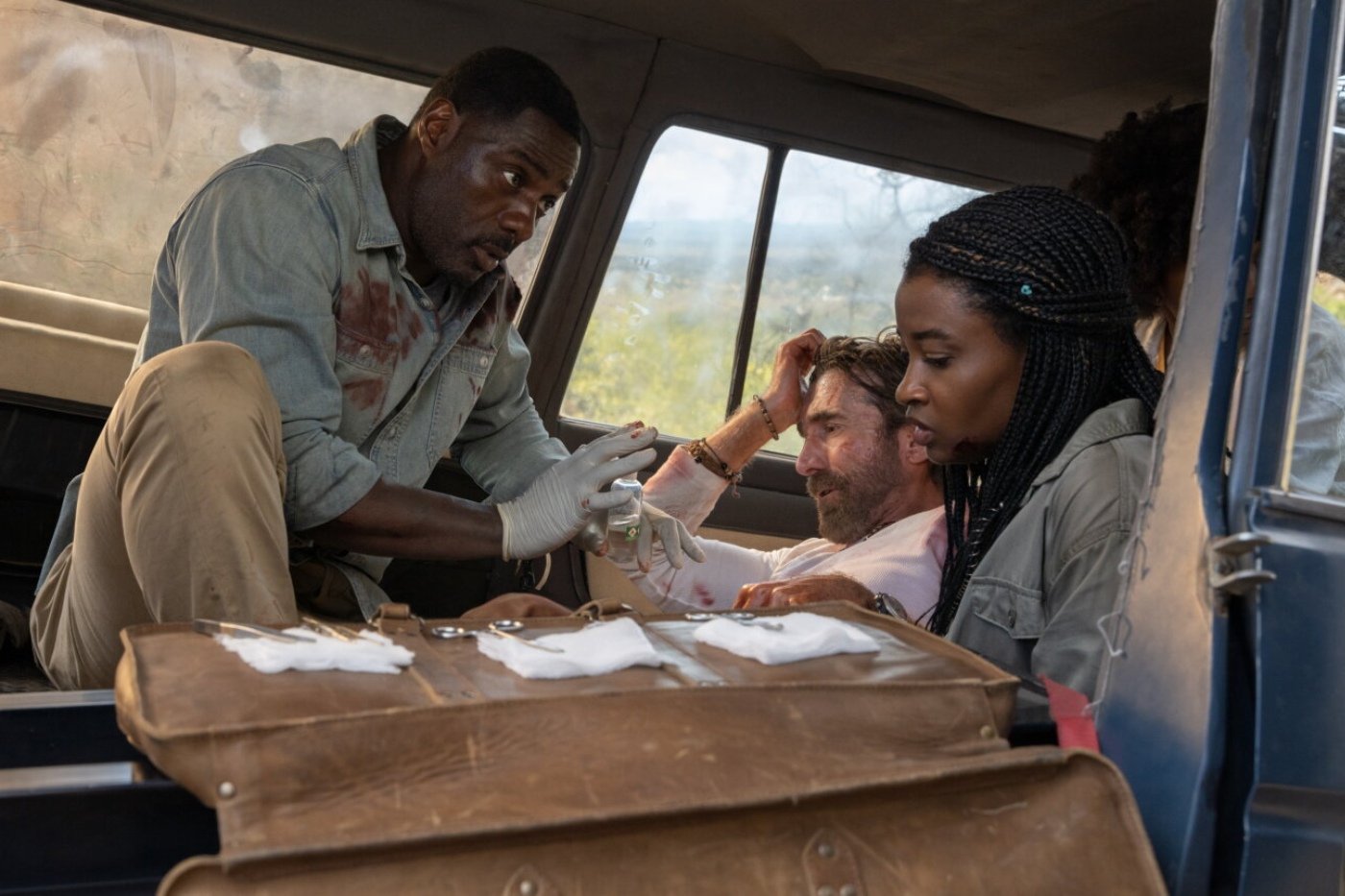 The trailers, posters, and even the first few minutes of the film give us a pretty clear idea of what the eminent director of the film is set to be — a blood-thirsty lion. The film however takes a sharp turn when Edris Elba steps into the picture as it becomes all the more clear that the lion isn’t the only predacious beast that is set to ravish us in this movie. The themes of Beast actually contain a bit of heaviness to it. Beast revolves around the strains that have developed within Samuel’s family due to the loss of Nate’s wife/Meredith and Norah’s mother. We see a relatively detailed narration of the family composition during the exposition of the story as Nate relays the events that had occurred which primarily revolved around his wife’s battle with cancer. Meredith on the other hand isn’t shy to express the love lost between her and her father as she often explains his lack of interest in her passion for photography, his choice to leave their family, and even the frequent nature of Dr. Nate breaking his word or promises. 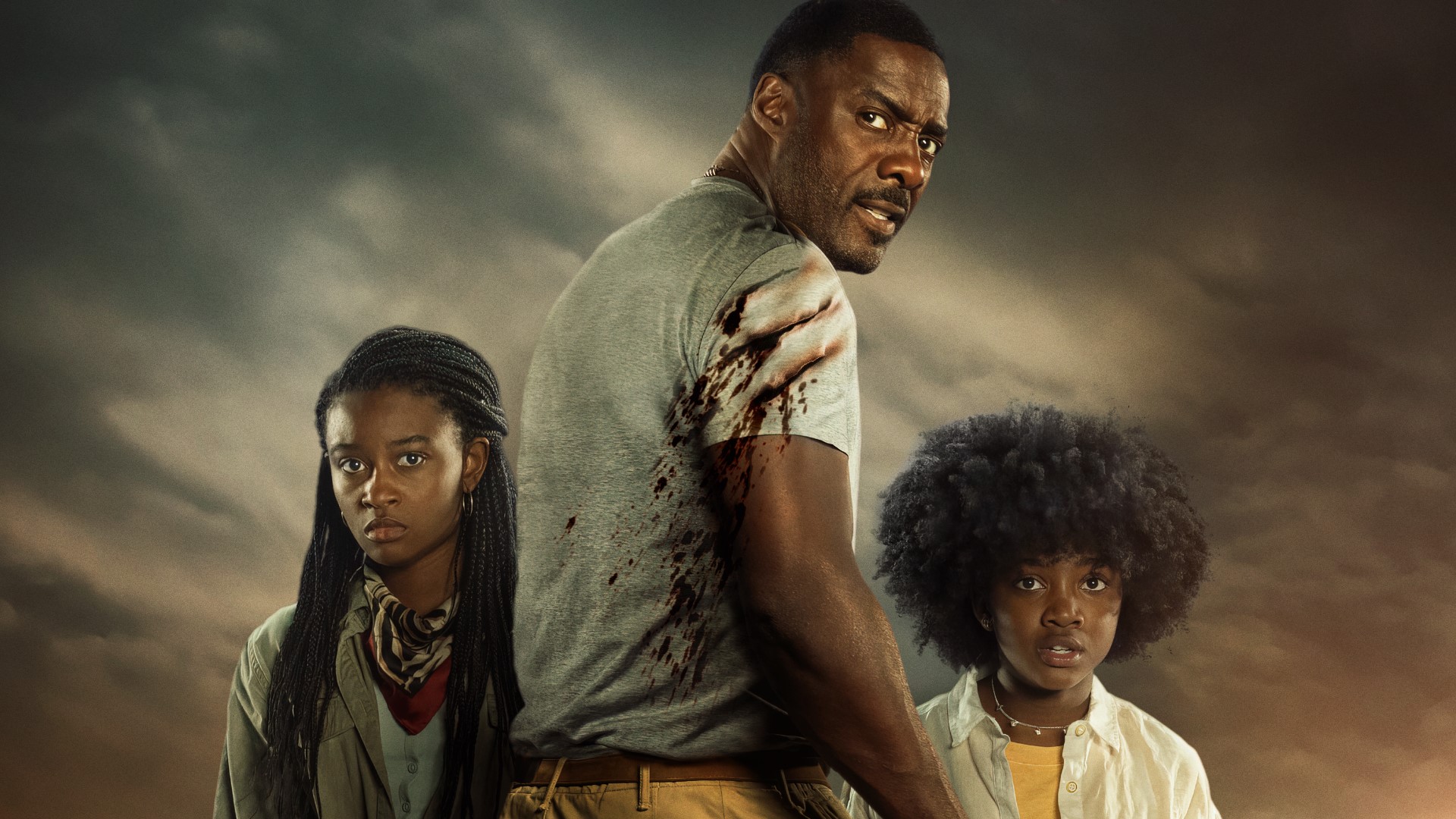 This central story at first felt irrelevant and was pushing it to its extreme. It does admittedly help the story gain a substantial motive to move it along. Beast, therefore, avoids becoming yet another mindless and meaningless thriller that’s done just for the sake of eliciting such emotions. It does have its moments where the story seems forced at times to provide such depth but overall Beast manages to add a sense of vibrancy and purpose to the story. Nate isn’t just a doctor anymore that has a huge exterior capable of ridiculously punching lions out of whim. Instead, he’s a man intent on protecting his daughters. The dream sequences even with Dr. Nate’s wife in a dark rural village in Africa add more motivation for our character which somewhat explains the rationality to the lengths he goes to in order to outwit the predatory beast. 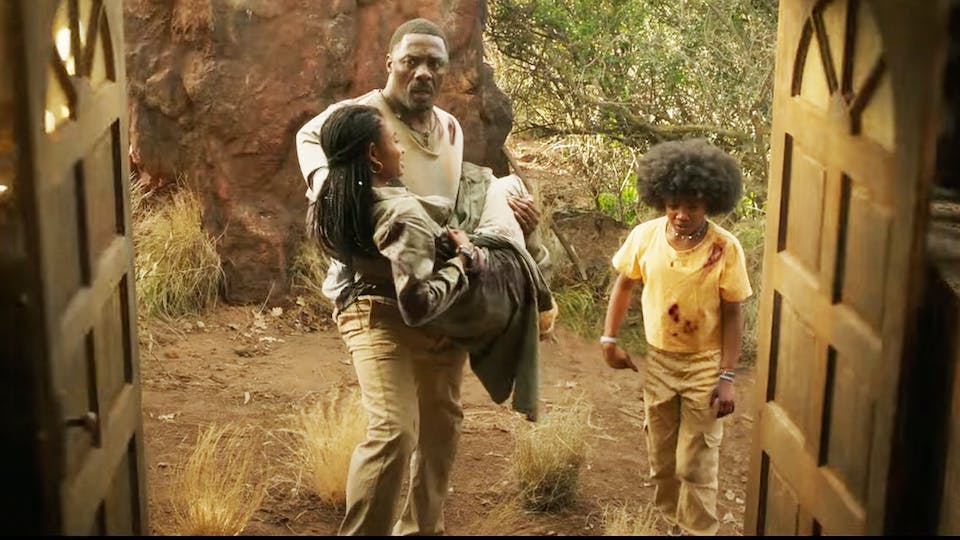 The characters in the film also have some depth to them which is very much needed in order to keep the film away from being plain and bland. Idris Elba manages to bring in the grief and stone-cold nature of Dr. Nate while also touching on his skills as a doctor. His physicality surprisingly isn’t the main direction of Elba’s character this time around which is admittedly unknown territory. You’d think that a man with such a physique would lean into an all-out action type of role but instead, we see a character who isn’t at all confident and is actually very strategic. The brute strength only kicks in when the need arises which is brought about by his intense need and desire to protect his children. Sharlto Copley surprisingly bends in this film for a supporting role and one that has him more as a supplementary side-kick. It’s also unfamiliar territory to be quite honest to see the actor dive into a role with more restraint which honestly didn’t pay off as his presence didn’t leave the mark that we know and love from the guy.

Fear In The Wild 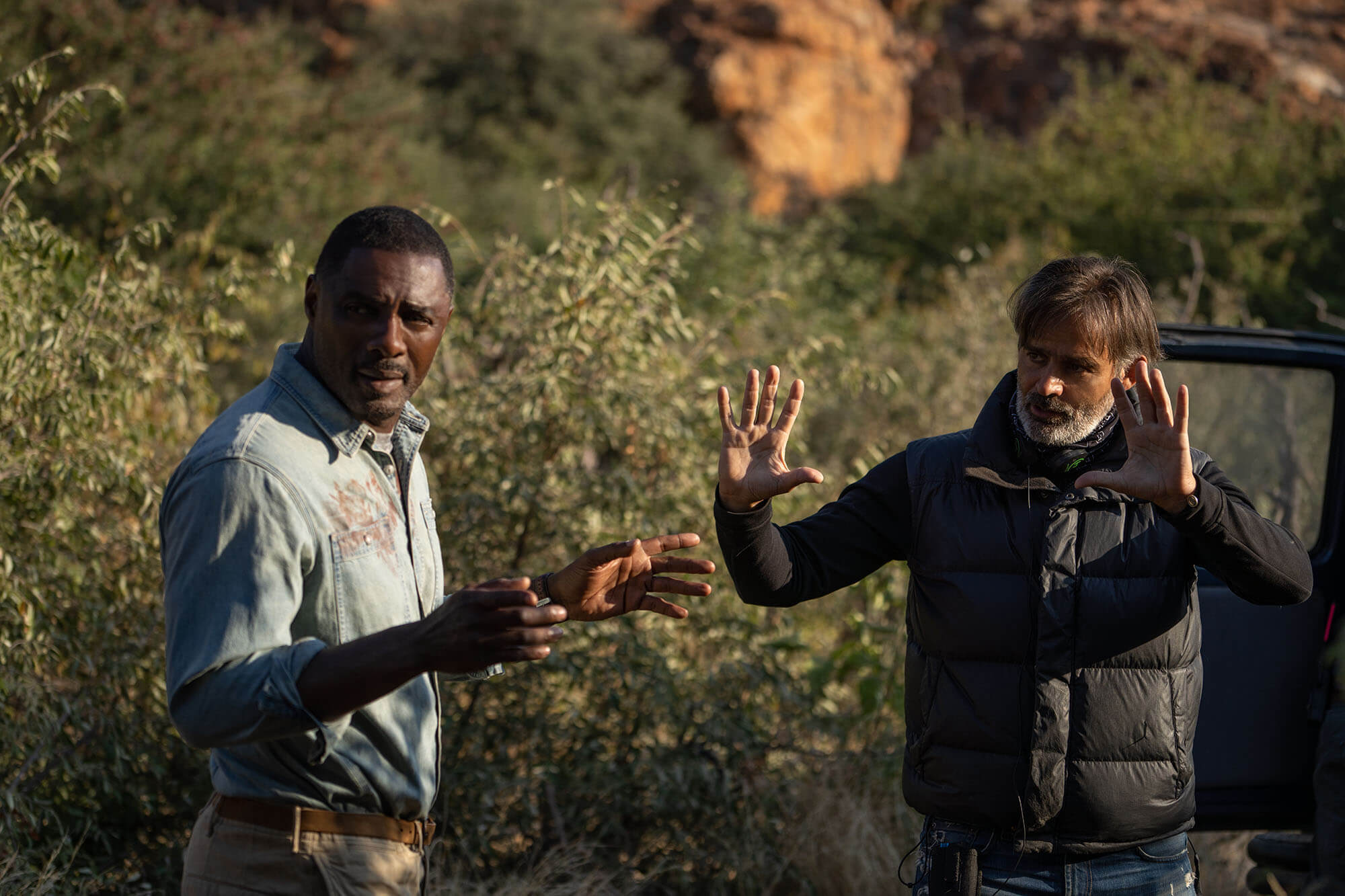 My first impression of Beast prior to watching the film itself was that it would be another typical survival of the fittest type of film that pits man against beast. I wasn’t wrong. It has that tendency to fall amongst the likes of Anaconda and even Jaws where an animal with major anger issues preys on human flesh. There was even a movie that feels very similar to this one which is the 2020 Megan Fox movie entitled Rogue which also featured lions as the main focal point of disaster. That aforementioned film was somewhat a disaster due to the CGI effects for the lions with Beast has the tendency to have as well as the main antagonist lion has moments that don’t seem all that believable. My point here is that Beast feels very familiar. Nothing is all that new in this presentation of a film that falls alongside others that have similar and generic plots. 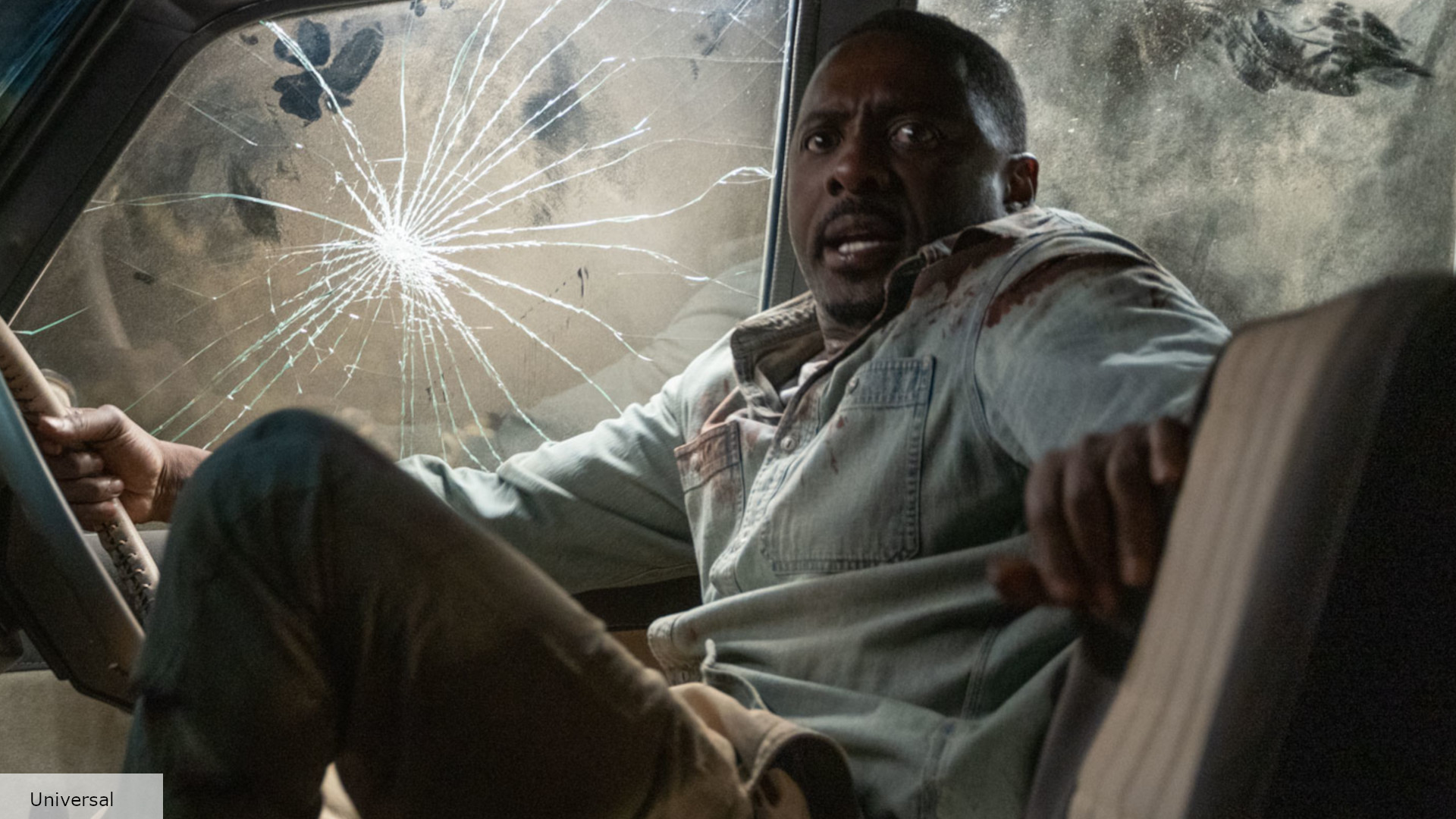 That being said, Beast is still very exhilarating. It hits the bullseye in creating a very exciting and jump-out-of-your-seat experience. There are several moments where the lingering threat of the lion looms so heavily as the suspense builds up to its absolute maximum point. There is also a couple of well-timed jumps scares that are admittedly very very effective. Beast maintains a very consistent tone in its visuals, especially during the scary and thrilling moments that mostly occur at night. The daytime scenes also have a quality in the colorization that continue with this tonality. One of the brilliant elements however is the ability to capture a really cool-looking landscape of Africa which allows the so-called world-building for a realistic setting to compliment the spectacle of the plot of the film.

Overall, Beast maintains the excitement of a pretty decent survival thriller. The pacing does suffer at times especially during the first few minutes of the film as it does take a while for the build-up and climax to finally kick in. It does continue to rise and rise from here on out which points to the worthwhile nature of the said exposition. One of the pitfalls however is the ending. There seemed to be no proper way for the film to end except for the way that it did but in the end, it felt very cheesy and unrealistic. Such an ending with all its predictability and the slight cliched manner in which the story unfolds makes Beast suffer and in turn, it is unable to reach its fullest of potential as a film.

As seen in our review of Beast, the film has its fair share of positive and negative points. It is very entrancing to witness its suspense and thrilling elements. The film has a pretty decent emotional story as well which pushed the film along. It, therefore, isn’t just a film that aims to be thrilling for the sake of doing so. The film however has a lot of similar plots and doesn’t really bring much to the animal survival kind of movie except for the somewhat deeper and meaningful themes that it contains. We, therefore, give the film a 6 out of 10 on our Hype Meter. It’s slightly a better offering than the recent thriller film Fall in terms of its production value and dramatic plot points but the difference is pretty minuscule to be quite frank. 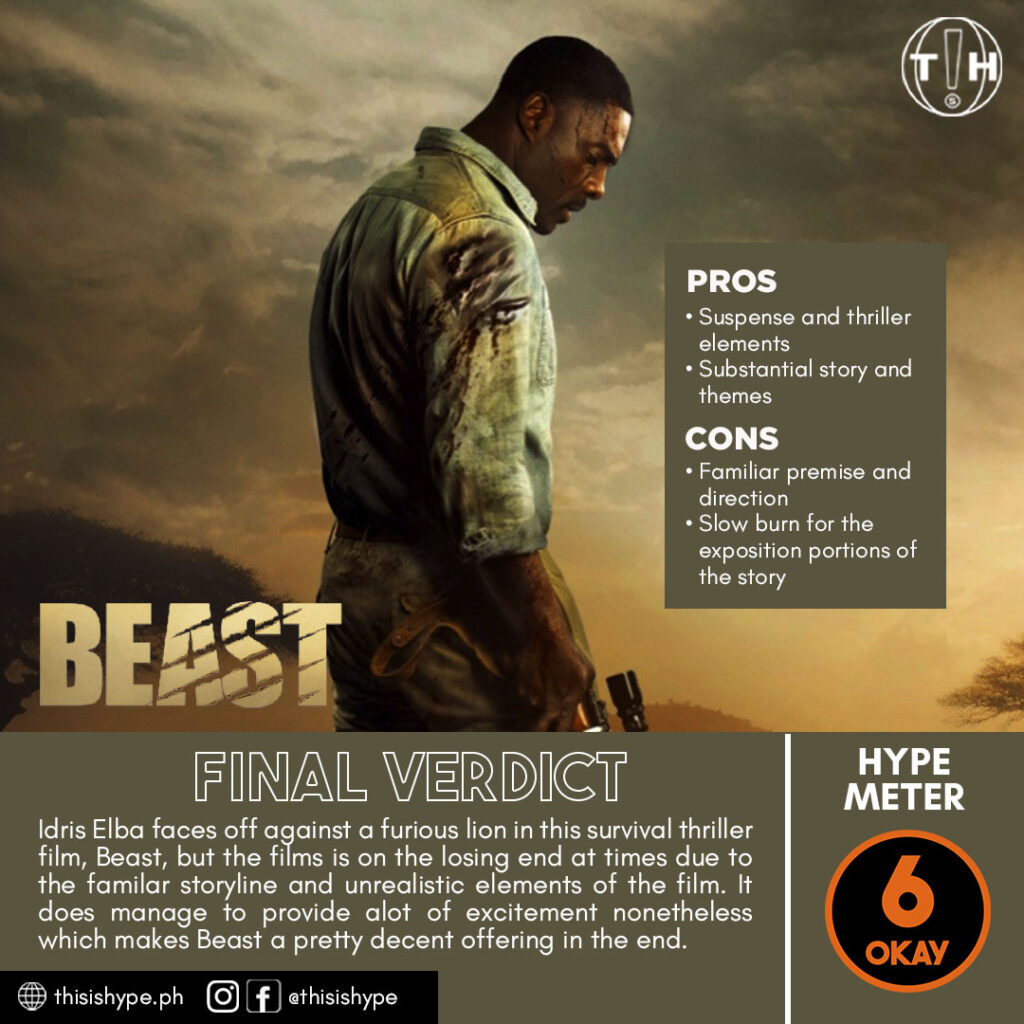 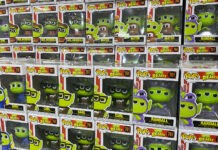 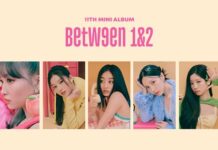 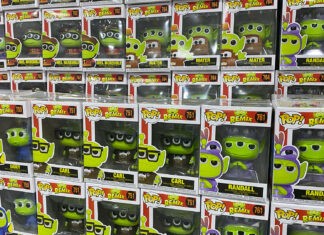 Avram Francisco
Calling all Funko Pop and Toy collectors! Big Boys has amazing steals and deals waiting for you this week for their Sumo Sale starting...