Home Editorial Interceptor Review: An All Too Familiar Action Thriller 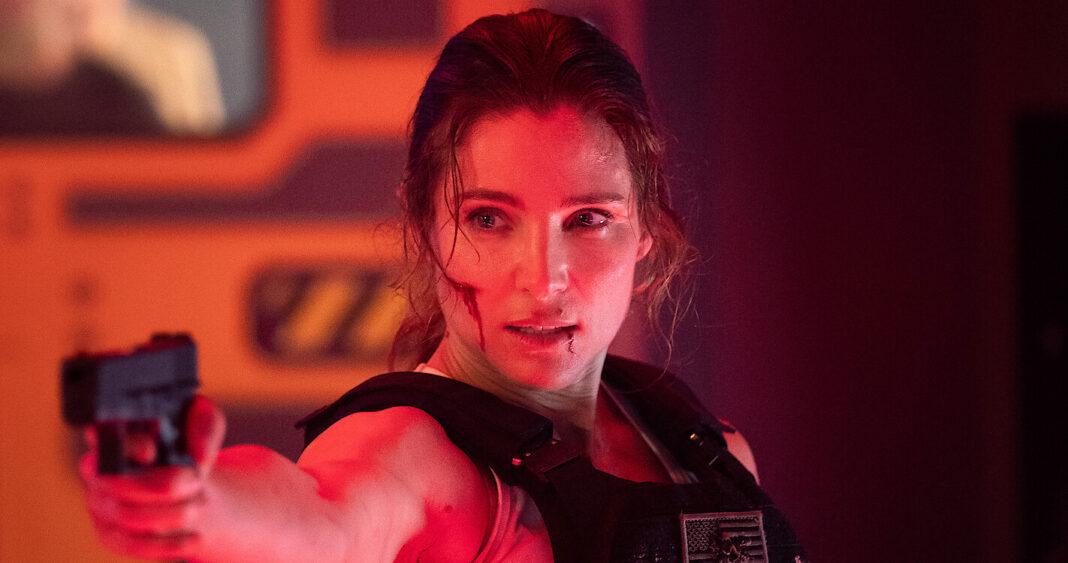 Netflix just dropped another film that aims to bring the attention back onto the streaming platform. Admittedly Netflix has had its fair share of ups and downs as of late which are further pushed to its limits with stiff competition in the world of movie and series streaming. The most recent contender for Netflix comes in the form of an action-drama-thriller film entitled Interceptor and we have seen the film in its entirety to review it here for you here at This Is Hype Ph. Interceptor happens to also be an American-Australian film that stars Spanish actress and wife of “Avenger” and action star Chris Hemsworth, Elsa Pataky (Fast & The Furious franchise) who plays the lead role of Captain J.J. Collins. Alongside Pataky is Australian actor Luke Bracey (The Best of Me, Holidate) who portrays the villainous Alexander Kessel. The film is the directed debut of Australian action thriller writer, Matthew Reilly, who co-wrote the screenplay alongside Stuart Beattie (Collateral). Pataky’s husband, Hemsworth, also took on major roles in the film as an executive producer, alongside his uncredited role as a television store sales clerk. Hemsworth also took the time to train alongside his wife for the grueling action sequences that we needed for the role of J.J. 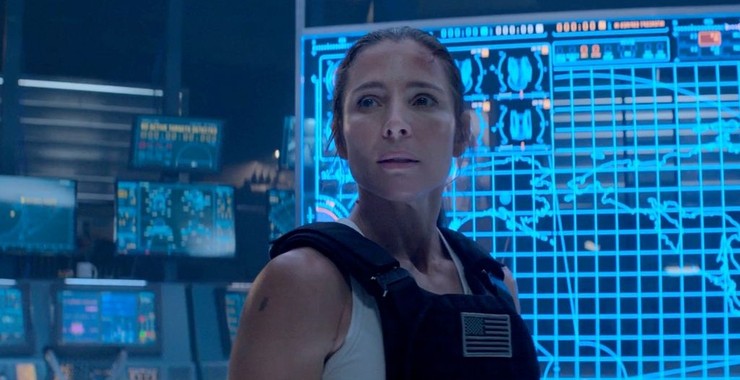 Interceptor is set primarily within the confines of a ship in an undisclosed location somewhere across the Atlantic which holds inceptor missiles — an international safety net used to deflect nuclear weapons in mid-flight. Captain J.J. Collins (Elsa Pataky) boards the vessel due to unwanted circumstances and is quickly thrown into the fire when an insider attack ensues on the ship, led by Alexander Kessel (Luke Bracey) who is in cahoots with Russian terrorists. Their intent is to destroy the United States in its entirety in order to purge the country and world from a so-called era of political oppression. Collins is the only hope for the country as she literally stands in the middle of an all-out war which she must try to contain within the confines of this ship in the middle of nowhere. 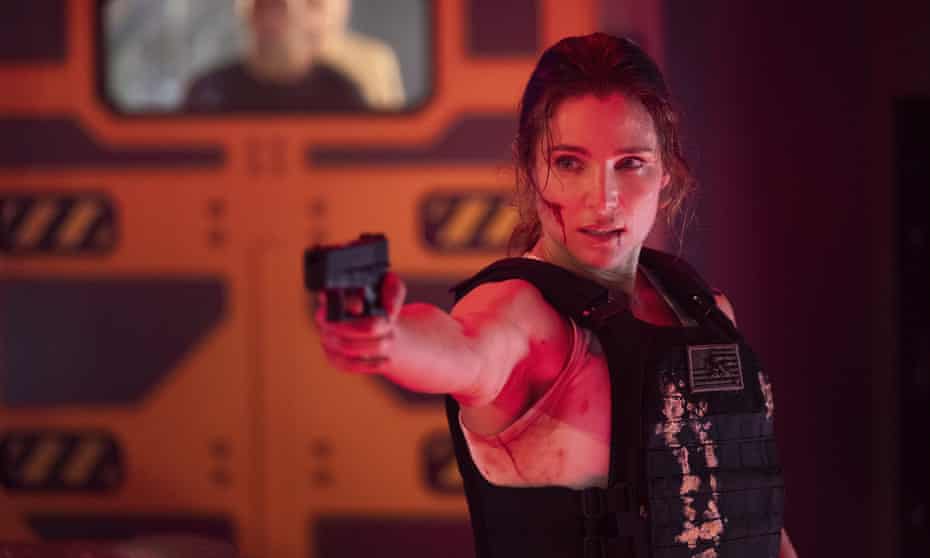 This Interceptor review, for the most part, will be spoiler-free. We will tackle the story’s progression in general and its standing in the action and drama film genre. We will also be discussing the overall visual and acting appeal that the movie brings forth in order to pinpoint if this is a film that is truly worth the time to see.

A Barrage of Action Movie Tropes 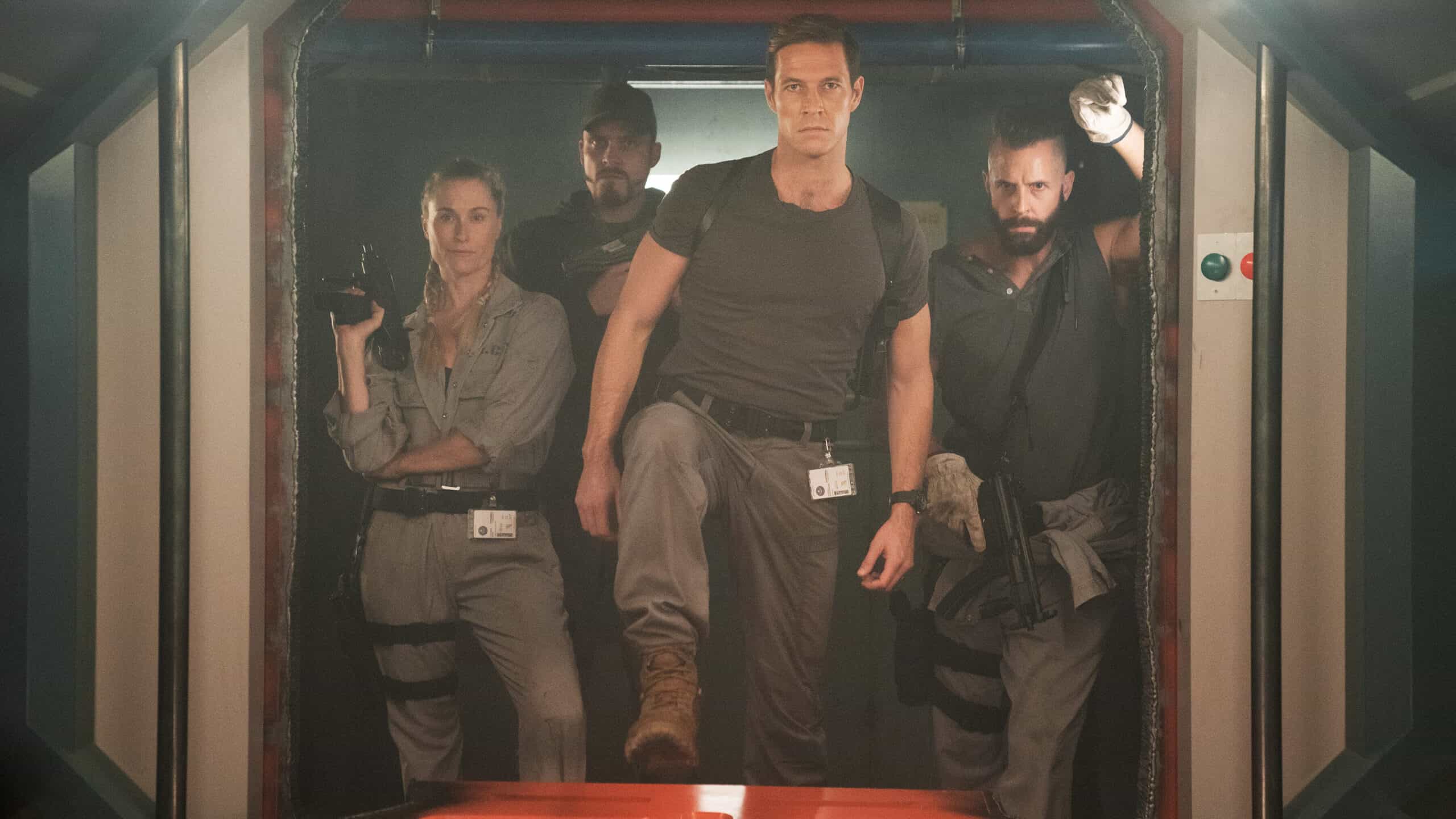 It becomes immediately evident that Interceptor combines a multitude of action film tropes. This is seen from the get-go and even pacing of the movie. Everything happens pretty quickly from the moment that the movie begins and such pacing is maintained all throughout its running time. This is primarily the case for the majority of movies in the genre. There isn’t much exposition that goes on but everything builds up and continues to rise in intensity as the movie progresses. There is a progression in the events that allow for the film to remain engaging and interesting all throughout. It does provide a somewhat mindless kind of action that makes it easy to consume through and through.

There are however moments when the story turns into a parade of overused action movie tropes that also make the film a little too predictable. There isn’t anything that really sets this movie apart from action films such as The Expendables and Taken as there is that back of the mind given the knowledge that good would still somehow prevail. The heroine of this movie isn’t as indestructible as most protagonists are but it does play around with it to that extent. Interceptor features several dramatic moments and scenes such as slow-motion jumping and close to the last-second moments that are meant to keep audiences at the edge of their seats. These stereotypical moments and even roles that were injected into the film point to a lack of ingenuity and creativity but as a whole, they still somehow managed to work out in the end. The film surprisingly features some gore and intense killings but despite their limited quantities they manage to keep the excitement going. 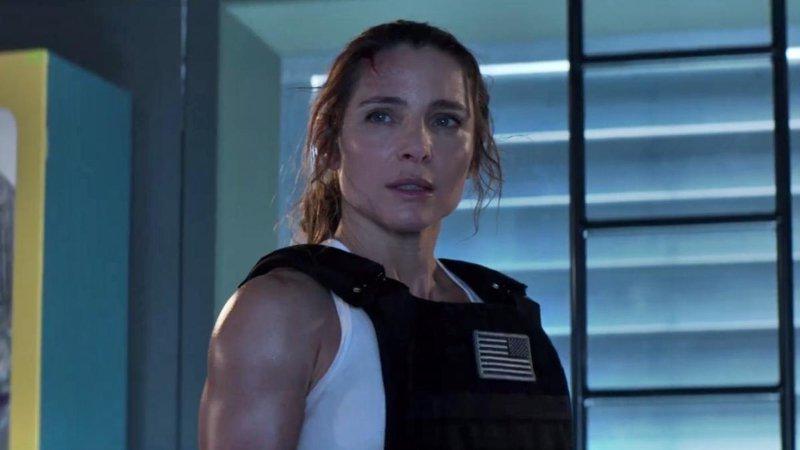 There are also moments that were over-the-top and at points were just too illogical such as Collins’ sudden and too coincidentally timed hallucinations and pep talks from her father. The action and fight sequences also fell into the trap of being overly done at times while also having moments that were quite underwhelming and sub-par in their execution. This basically shows that the story as a whole was far from perfect as it contained several potholes — the majority of which however can still be overlooked. As a whole, the execution fell pretty short in delivering a meaningful and worthwhile story as the main focal point of the film seemed to be the action alone. Was it all fun and exciting in the end? Absolutely. 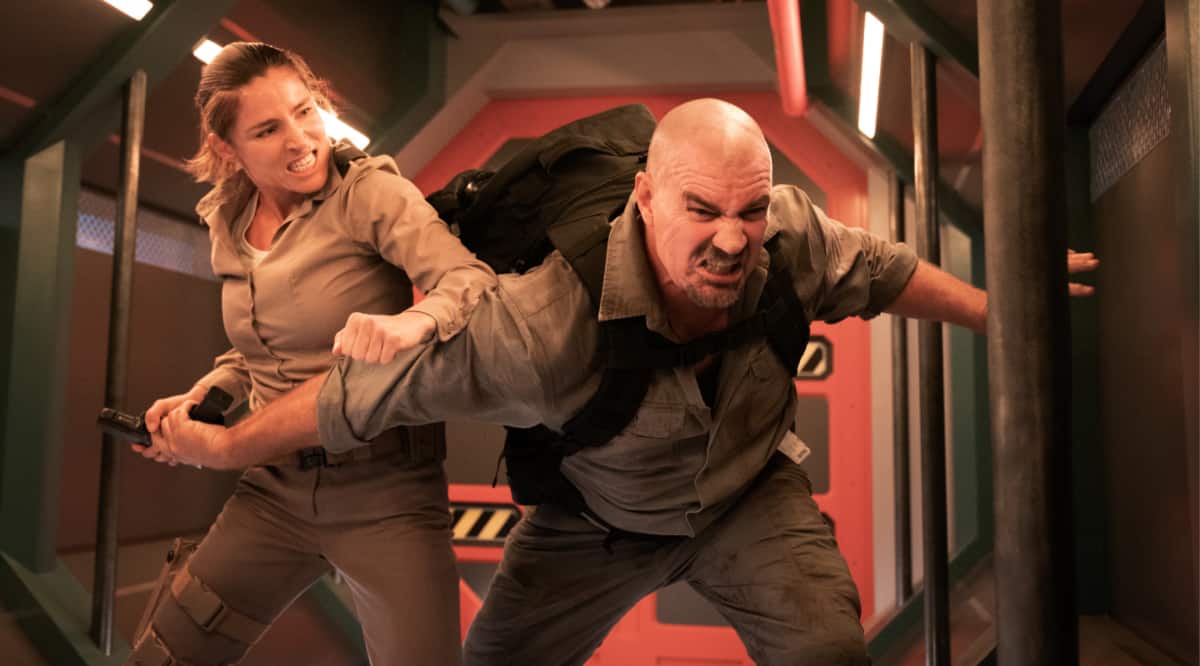 Speaking of meaningful stories, Interceptor to a certain degree tried its best to interject as much substance into its plot as it possibly could. Alexander Kessel was supposedly the driving force for such an element to move along. The film tries to insert at the center of its antagonist’s motivation for such heinous actions a politically and propagandistic driven intention. The villain of the story aims to set things straight for America but ridding the world and the country of its egotistic and discriminatory citizens. These are clearly seen and heard throughout the back and forth conversations between Collins and Kessel. The protagonist also takes a stab at delivering a feministic angle to the film — one who has gone through her fair share of abuse and discrimination as well. These attempts as mentioned didn’t really play out all too well in the grander scheme of things but they are still however very evident. The effort to achieve a deeper storyline is acknowledged.

One of the biggest setbacks in my opinion however comes in the form of the film’s last few moments. The ending wasn’t just predictable but was altogether on the underwhelming side. It didn’t really tie everything up together smoothly and instead felt abrupt and confusing even. 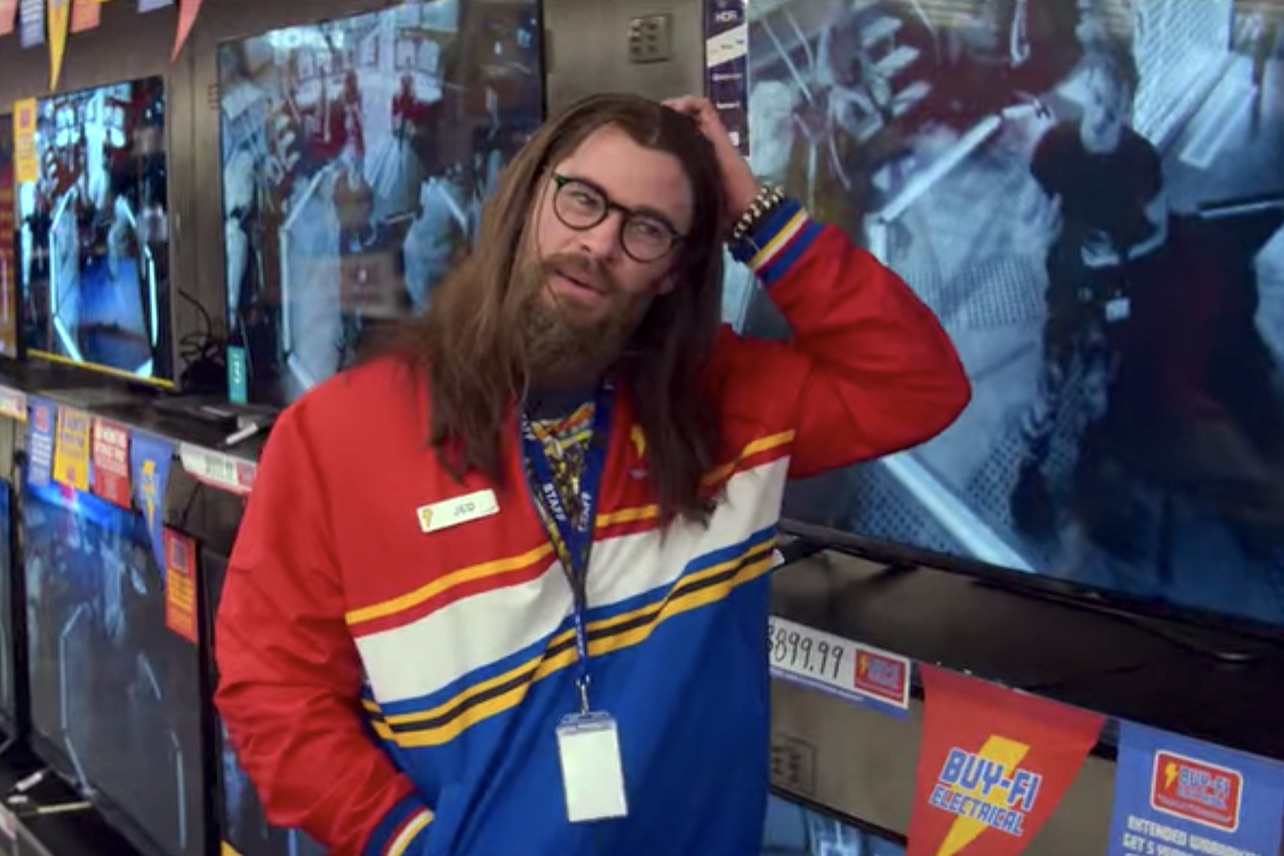 One of the elements that also didn’t help as much to push Interceptor along as a great film was the acting of the majority of its cast members. While there were moments that Pataky shined in the film, it still lacked the overall star quality that was necessary and needed from her as the lead actress. She wasn’t really able to maintain a stable and clear definition of what her role entailed and despite having emotional moments her overall stoic disposition created a somewhat monotonous performance. The same could be said regarding Pataky’s villainous counterpart as the portrayal of the role felt flat for the most part and instead of becoming the perfect villain to the story, Kessel in the end was just a mediocre antagonist — a far cry from a Bond villain. In the end, Kessel ended up becoming just another plain and simple, boring antagonist. The supporting cast members pretty much delivered on the same playing field as well with bland and at times cringe-y performances but one of the saving graces had to be the Chris Hemsworth cameo which felt like it was taken straight off from the fat Thor character. That alone to be honest was worth seeing.

Interceptor as seen in our review is one of those films that are overall just fun to watch especially if you are after a mindless barrage of action and fighting. The story isn’t all that great in terms of having substance as the action parts are what really draw you into this movie. Overall the film has its share of ups and downs but it is nonetheless an entertaining one at that. If you are in search of a film that will keep you at the edge of your seat then this one will be enough to do the trick. You may have to just overlook the inconsistencies in acting, some plot holes, and the plethora of action tropes that tend to make the film just a tad bit on the predictable side. 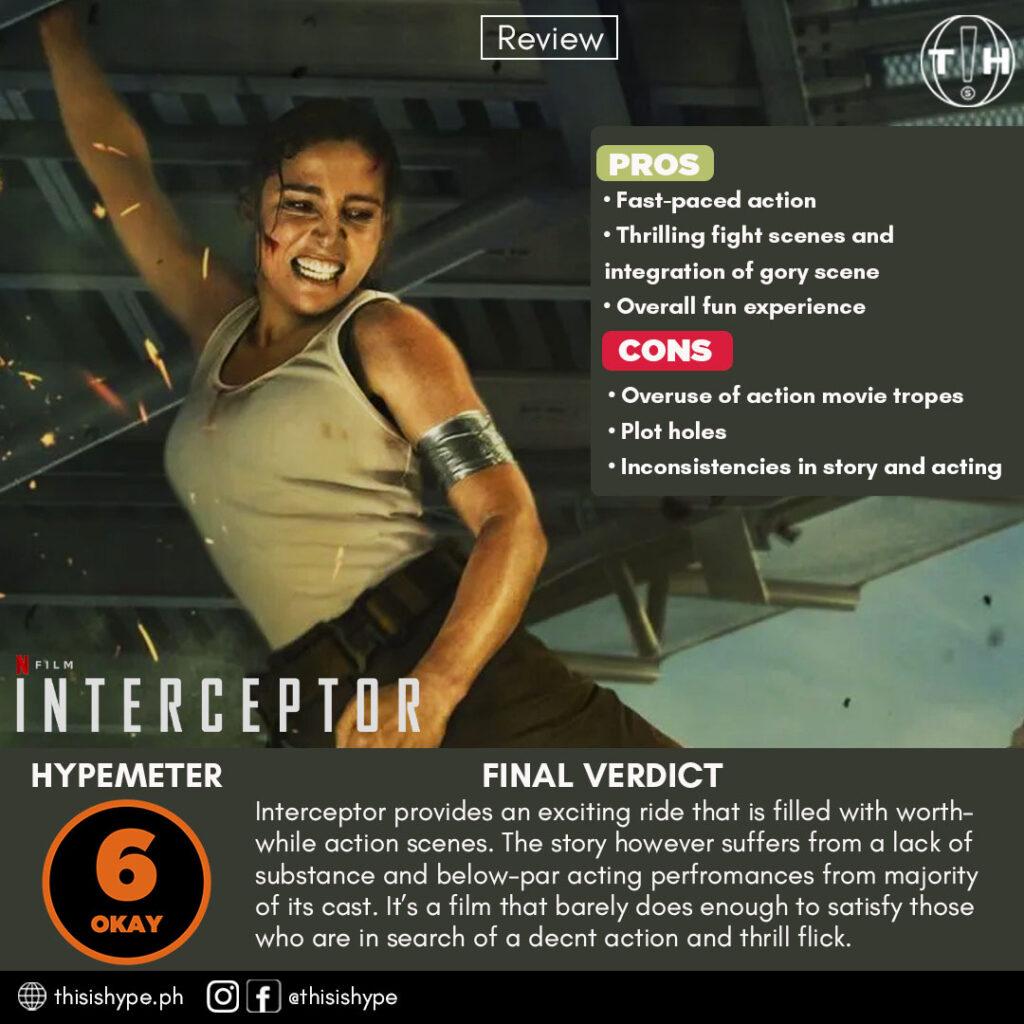 With films that are now being released such as Top Gun: Maverick that focus on the military type of action, Netflix’s Interceptor may get lost amongst its very stiff competition but nonetheless it is still an average, simple yet still very much fun type of film to watch.

Looking for a review just like this one on Interceptor? Check these articles out as well: